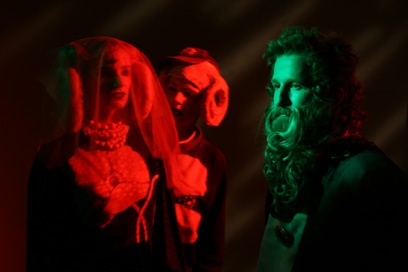 A continuous screening of a new short film by the British artist Emily Wardill, Sick Serena and Dregs and Wreck and Wreck (2007). This film, projected on 16mm, combines images of English stained glass windows with footage of narratives staged by the artist. These stories of love, faith and betrayal proceed through a series of vignettes, staged and lit to echo the imagery of the stained glass, but also calling to mind the emotions and artifice of cinematic melodrama.

Like much of Wardill's work, Sick Serena... was inspired in part by theoretical accounts of the operation of visual culture within history, from John Ruskin, who is quoted in the film, to Jacques Ranciére. One of the artist's interests is the use of paradigms in contemporary political rhetoric, a strategy which is here traced back to the use of stained glass as a tool of official communication within a largely illiterate medieval society. Another of her interests is the way in which filmmakers such as Fassbinder used melodrama as a Trojan horse, as a means to smuggle political critique into popular entertainment.

However, while Wardill's practice may contain an element of analysis, it is also highly elliptical. Sick Serena... deliberately resists any settled reading, mixing medieval iconography and modern references, and undercutting its ritualised story with faltering delivery and slapstick comedy (the buns on one of the women's medieval headdresses are made from just that - buns). Wardill's films deconstruct their own visual languages, in a way that is inspired by an attempt to empower the viewer, but which also emphasises the irreducible strangeness of images.

Emily Wardill's Sick Serena and Dregs and Wreck and Wreck is a Film London Artists' Moving Image Network and Picture This co-production, produced as part of a Bristol Mean Time Residency, supported by The Elephant Trust out of the George Melhuish Bequest and distributed by LUX.