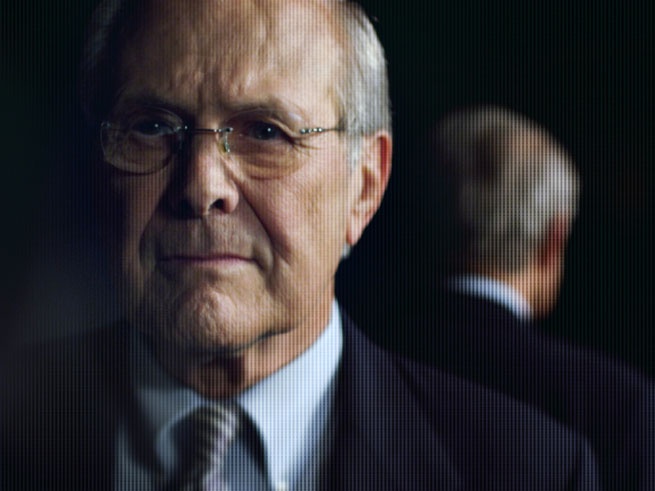 Donald Rumsfeld, congressman for over fifty years, advisor to four presidents and so-called principal architect of the Iraq war, has never been short for words.

Renowned for his ability to spew contradictions and to use rhetoric to bewitch and befuddle, how will Rumsfeld fare under the penetrating gaze of Oscar-winning director Errol Morris (The Thin Blue Line, The Fog of War, Tabloid)? Morris steers away from a typical interview style, instead allowing Rumsfeld to take the stage as the writer/performer of his own life, using the many thousands of internal memos he calls ‘snowflakes’. But as Morris pulls him back to retrace controversial flashpoints such as the invasion of Iraq, accusations of torture, and the revelations of Abu Ghraib, their conversation becomes a cat-and-mouse game of argument and counterargument, evidence and evasion.

Candid and chilling, The Unknown Known is an utterly mesmerising portrait, taking us beyond Rumsfeld’s infamous web of words and into the unfamiliar terrain of his mind.