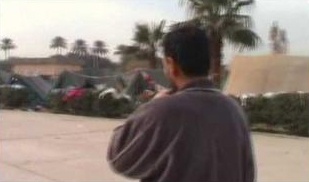 Homodi Hasim's documentation of the destruction and death inflicted by the American assault on Fallujah, followed by Julia Guest's powerful documentary about activist Jo Wilding's opposition to UK/US foreign policy.

After a major US-led offensive launch in November of 2004, two-thirds of the city of Fallujah was destroyed and thousands of its citizens were forced into refugee camps.

Code Pink commissioned Iraqi filmmaker Homodi Hasim to send a team of videographers and investigative journalists to Fallujah to record the destruction and death inflicted by the American assault. He also interviewed many of the thousands of Fallujah residents who were forced to live in refugee camps on the outskirts of Fallujah and Baghdad.

Jo Wilding, a young trainee lawyer and human rights worker in Iraq, produced some of the finest frontline reporting of the war online from Fallujah, then under siege by the US Marines. Living with families and without a flak jacket, she all but shamed the embedded army of reporters in her description of the atrocious American attack on an Iraqi city.

Her documentary, directed by Julia Guest, presents the evidence of a crime and asks Tony Blair to take his share of the responsibility: a basic question now asked by millions of Britons. - John Pilger