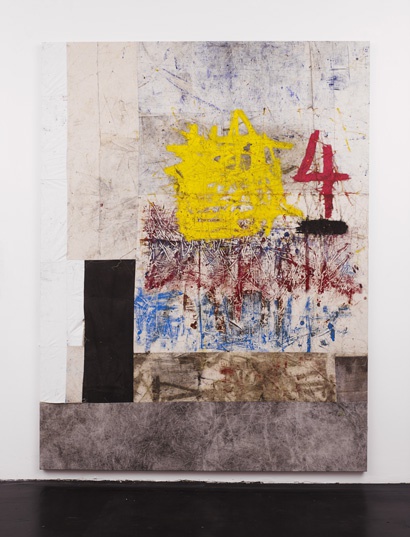 ICA Executive Director Gregor Muir and artists Oscar Murillo, Brian Fay and Caragh Thuring discuss painting in the context of the exhibition Beware Wet Paint, a group show of individual works by artists for whom painting forms a single strand within a multidisciplinary practice.

Accepting that interdisciplinary practice is now intrinsic to our understanding of contemporary art, artists today view painting as one of many mediums at their disposal. No longer viewed as a hermetic practice, painting presently has the potential to position itself as an interdisciplinary art form. The panel examine this condition whilst exploring further the idea that painting has become increasingly anachronistic and self-referential to its own genealogy.

Oscar Murillo (b. 1986, Colombia) lives and works in London. He holds an MA Painting, Royal College of Art (2012) and BA Fine Art, University of Westminster, London. Recent solo exhibitions and projects include: we don't work sundays, Marian Goodman, Paris; A Mercantile Novel, David Zwirner, New York; and Distribution Center, The Mistake Room, Los Angeles (all 2014). Murillo will be exhibiting as part of an adaptation of Beware Wet Paint when it travels to La Fondazione Sandretto Re Rebaudengo, Turin (29 October 2014 – 1 February 2015).

Brian Fay is an artist and lecturer in Fine Art at the Dublin Institute of Technology. He is currently completing a PhD at Northumbria University on drawing, temporality and the conservation of paintings. Recent solo exhibitions include Broken Images or When Does Posterity Begin? (2011), Royal Hibernian Academy, Dublin; the 3-part Some Time Now series (2007/08), The Lab, Mermaid Arts Centre and Solstice Arts Centre (2005), and Web, Butler Gallery, Kilkenny (2005).

Beware Wet Paint and this accompanying discussion coincide with the launch of the forthcoming Thames & Hudson publication 100 Painters of Tomorrow, which features an introductory essay written by ICA Executive Director Gregor Muir.