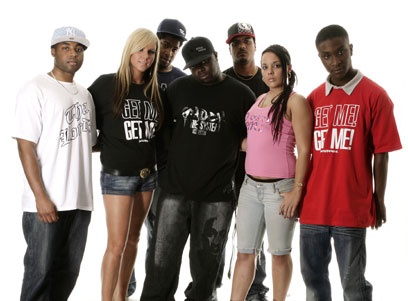 Dirty Canvas: Shock to the System

"it's quite a pleasant surprise to have Boy Better Know, Jammer, Ruff Sqwad, Plastician, Renegade Boys, DJ Magic and our very own Hattie Collins converge on the dusty red road between the Queen and Lord Nelson to deliver an appreciated dosage of grime" RWDmag

Dirty Canvas kicks off in 2007 with a launch party for the Aftershock camp. Aftershock records, which is run by one of grime's biggest producers Terror Danjah (along side his business partner Flash). The label been going for over three years and in that time has released underground anthems such as N.A.S.T.Y's "Cock Back" (feat Crazy Titch & Riko), Crazy Titch "I Can C U", Bruza "Get Me", Big-E-D "Frontline", Sadie "So Sure" (feat Kano) and Shola Ama "With U".

Terror's production skills have cemented him firmly as one of grime's pre-eminent producers and underground hit-maker. This has also landed him commercial releases including contributions to Kano's "Home Sweet Home" album, Roll Deep's "In at the deep end" album and Sway's "This is my demo" album. He has also remixed tracks by the Prodigys, Shaznay Lewis (All Saints) and Klashnekoff. During this time, he also found time to DJ at BBC's 1xtra.

The new "Shock to the system" album showcases Terror's and the rest of the Aftershock label's busy work, which will place them at the heart of grime's re-emergence in 2007 alongside new albums by Dizzee, Wiley, Kano and Lethal B.

Perhaps the most famous MC in the Aftershock camp is the boisterous cockney Bruza - who will be performing on the night, and made headlines earlier this year when he took part in the Urban Classicals project in collaboration with the BBC Concert Orchestra. Back in 2003, Bruza hooked up with MC Triple Threat to start honing his own mic style and later joined Aftershock releasing 'Bruzin', 'Get me' (after his familiar catchphrase), 'Ave some of dat' and also a feature on The Streets 'Get Out My House'. As a live act, he has become one of the most in-demand UK players, regularly tearing it up at larger raves like Sidewinder and the Urban Music Festival.

Other Aftershock grime performers on the night will include Bruza's foil Triple Threat, Birmingham's D.E.Velopment as well as younger crews Tha Lordz and The Hooligans. The label will also be showcasing it's R'n'G (Rhythm and Grime) players like Gemma Fox and Sadie who have recorded vocal tracks with some of the scenes biggest MCs including Kano, Lethal B and Wiley.

With Terror's place at the heart of the scene cemented you can be sure that there will be plenty of further special guests passing through at this event also (you have been warned!)