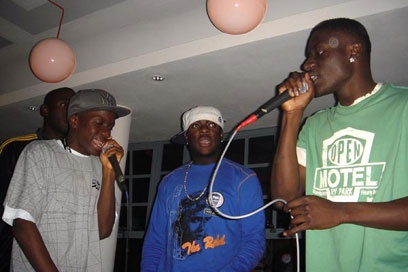 "It's quite a pleasant surprise to have Boy Better Know, Jammer, Ruff Sqwad, Plastician, Renegade Boys, DJ Magic and our very own Hattie Collins converge on the dusty red road between the Queen and Lord Nelson to deliver an appreciated dosage of grime." (RWDmag)

"Sorry to make you feel bad that you weren't there, but Dirty Canvas was an extremely heavy night." (rapnews.co.uk)

Ruff Sqwad, who headlined the first ICA Dirty Canvas show in September to big acclaim, return to the fold to headline again. Coming straight out of Bow, which is grime's epicentre (home also to Dizzee and Wiley), Ruff Sqwad are adored by grime fans loving Rapid's hugely distinctive and impressive productions and the range of MC talent on offer. Ruff Sqwad will be joined by very special guest MCs. Don't be surprised to see one of grime's heavyweights involved on the night (you have been tipped off!).

Also on the line-up is DJ Logan Sama, who is widely considered to be the Westwood of grime with his Monday night Kiss FM (11pm-1am) programme being the scene's prime time media slot. Logan, who will be DJing on the night, has been working hard on the scene having graduated from pirate radio (Rinse FM) and has now set up his own label Adamantium Music, to release the scene's biggest tunes.

Dirty Canvas residents DJ Magic and Bun-U will be spinning a selection of hype grime tunes.