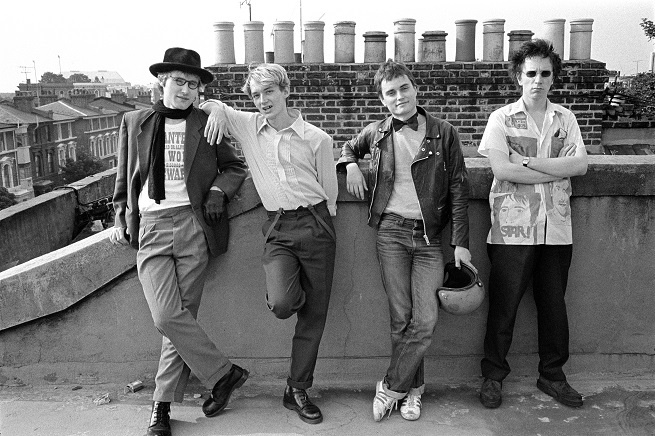 Due to a limited capacity please arrive early to avoid disappointment. Join the Facebook event

A presentation of rarely seen photographs and ephemera relating to the early stages of the band Public Image Ltd’s (PiL) design from 1978-79 with a focus on the design of the album Metal Box. Original band members included John Lydon (aka Johnny Rotten - vocals), Keith Levene (lead guitar), Jah Wobble (bass) and Jim Walker (drums). Working closely with photographer and designer Dennis Morris, the display explores the evolution of the band’s identity, from his influential journey to Jamaica with John Lydon in 1978 to the design of the iconic Metal Box.

Set against a backdrop of political and social upheaval in the UK, the years 1978-79 marked a period that hailed the end of the Sex Pistols and the subsequent shift from Punk to New Wave. Morris sought to capture this era by creating a strong visual identity for the band. His subsequent designs further aligned PiL with a style and attitude that announced a new chapter in music history.

For PiL’s debut single Public Image, Morris designed a record sleeve in the format of a single folded sheet of tabloid newspaper featuring fictional content about the band. His unique approach to design was further illustrated by the debut PiL album, Public Image: First Issue (1978). In a very un-Punk manner, its cover and sleeve design imitated the layout of popular glossy magazines.

The band’s second album—the critically acclaimed Post-Punk classic Metal Box (1979)—further reinforced Morris’ approach to branding and promoting the PiL experience. While the album’s title was conceived by Lydon, it was Morris who designed the cover—a metal 16mm celluloid film canister—embossed with the band’s new PiL logo reminiscent of a breakable medicine tablet. The album’s distinctive packaging was produced at the Metal Box Factory in Hackney, prior to its closure, revealing a bygone age of local manufacturing within London.

Dennis Morris is a British-based artist who has used the camera to produce an in-depth body of work on extraordinary individuals.

Closely associated with music, Morris has created some of the most iconic and memorable images of Bob Marley and the Sex Pistols, as well as the Marianne Faithfull Broken English album cover. He has also captured the essence of the Sikh community of Southall, West London; the collection was subsequently bought by English Heritage. Morris also created the iconic Public Image Ltd logo and the band’s first two album sleeves, including the Metal Box.

Several books of his work have been published, including Bob Marley: A Rebel Life; The Bollocks, on the Sex Pistols; and Growing Up Black, a chronicle of Black Britain in the 1960s and 1970s. His work is well recognized and has been exhibited internationally at the Today Art Museum, Beijing; Laforet Museum, Tokyo; Arles Photography Festival, France; The Photographers’ Gallery, London; The Metropolitan Museum of Art, New York and The Rock and Roll Hall of Fame, Cleveland.

His photographs are included in prestigious public and private collections, such as the Victoria and Albert Museum, London, and have appeared in numerous publications, including Rolling Stone, Time, GQ, Vogue, W, and Frieze. His work is included in books such as Lipstick Traces: A Secret History of the Twentieth Century by Greil Marcus; Century by Bruce Bernard; and 100 Days of Active Resistance by Vivienne Westwood.

With special thanks to Artefacts Framing, Keith Reilly, Sonos and Tapestry for their support of the exhibition. The ICA Fox Reading Room was made possible by the generous support of the Edwin Fox Foundation.