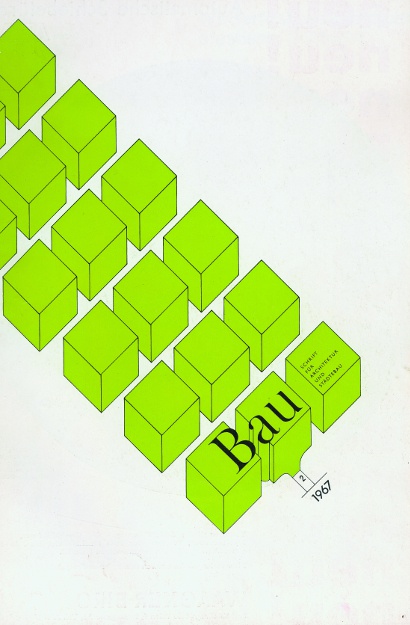 In light of the display Everything is Architecture: Bau Magazine from the 60s and 70s, this talk will serve as a precursory investigation into the little-known Austrian magazine Bau, co-edited between 1965 and 1970 by Hans Hollein, Walter Pichler, Günther Feuerstein and others.

Speakers include architectural historian Dr. Eva Branscome and architect and founder of experimental group Archigram, Peter Cook. The discussion will be chaired by Prof. Murray Fraser.

Eva Branscome is an architectural historian and writer based in London where her research centres on the history of modern architecture. Her accomplishments in heritage of the most recent past have led to the inclusion of more than 50 buildings on the statutory list of historic buildings in England and Scotland including the Barbican, Lloyds and the University of East Anglia. She currently teaches at University College London. She has just commenced postdoctoral research sponsored by the Gerda Henkel Foundation in collaboration with the Museum Abteiberg Mönchengladbach, Germany. It will be investigating the interface and interaction of Hans Hollein’s architecture and contemporary art practice.

Professor Sir Peter Cook RA, founder of Archigram, former director of the ICA, and Bartlett School of Architecture at University College, London has been a pivotal figure within the global architectural world for over half a century. His achievements with radical experimentalist group Archigram have been the subject of numerous publications and public exhibitions and were recognised by the Royal Institute of British Architects in 2004, when members of the group were awarded the RIBA’s highest award the Royal Gold Medal. In 2007, Peter was knighted by the Queen for his services to architecture. He is also a Royal Academician and a Commandeur de l’Ordre des Arts et Lettres of the French Republic. Peter is currently a Senior Fellow of the Royal College of Art, London. His professorships include those of the Royal Academy, University College, London and the Hochschule fur Bildende Kunste (Staedelschule) in Frankfurt-Main, Germany.

Murray Fraser is Professor of Architecture and Global Culture at the Bartlett School of Architecture, University College London, as well as Vice-Dean of Research for the Bartlett Faculty of the Built Environment. He has published extensively on design, architectural history & theory, urbanism, post-colonialism and cultural studies. He was co-creator of the Archigram Archival Project, shortlisted for the 2010 RIBA President’s Research Awards, which makes freely available online some 10,000 drawings and other artefacts from the seminal 1960s/70s architectural group, Archigram.