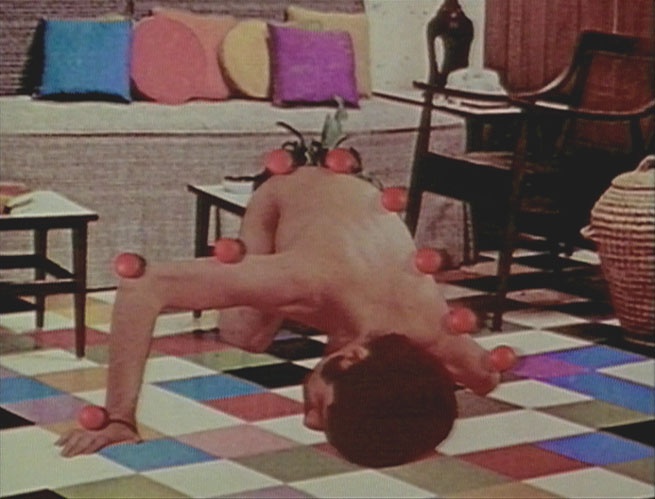 The Fashion Show
By Penny Dedman, Triple Vision/Vida , Terry Flaxton
UK, 1977-1978, 5 minutes
The initial inspiration of this early work by VIDA (Flaxton, Cooper and Deadman) was in fact a critique of fashion and the fashion industry (to also be seen in 'Talking Heads, 1978/9). Having described the back stage and hidden act of preparing what was to be paraded on the catwalk in a monochrome style (blue and white as opposed to the more familiar black and white), Vida with several other notable makers (Theo Eshetu for instance), dive through into colour and the glamourising of the female form (in an act similar to that tried out with the function of interruptions, developed in Presentiments 1977). To fully underline their critical stance, Flaxton and Vida ustilise a piece of music by Kraftwerk - Showroom Dummies - which talks of showroom mannequins coming to life when no-one is viewing them

No President
By Jack Smith
USA, 1967-1970, 45 minutes
The surviving version No President alternates scenes shot in the Plaster Foundation with found footage – including a Lowell Thomas travelogue of Sumatra, a clip, apparently from the late 1940s, of an unidentified couple singing “A Sunday Kind of Love”, and newsreel footage of candidate Willkie addressing the future Farmers of America. The narrative is structured around two tableaux. In the first, the future presidential candidate (Rosenthal) is attended by a nurse and then abducted from his crib by a mustachioed pirate (Doris Desmond) out of a Spanish galleon flick; in the second, which features a professional belly-dancer as well as the singer Tally Brown striking an agitated diva pose, Willkie is auctioned and sold on the block of a slave market modeled on the one in the 1942 Maria Montez vehicle, Arabian Nights. Thus, Smith’s hothouse childhood fantasies merge with entropic, harshly lit glamour scenes wherein the garishly costumed hobnob with the brazenly nude. As befits a political scenario, No President is rife with representations of the phallus – metaphoric and otherwise. Among other things, the movie literalizes the idea of a champagne cocktail. Parker Tyler would hail No President as “an even more daring exploitation of the themes in Flaming Creatures,” and the Selection Committee for the newly established Anthology Film Archives voted to include both in its canon of essential cinema. (J. Hoberman)

Downs Are Feminine
By Lewis Klahr
USA, 1993, 10 minutes
'Lewis Klahr's Downs Are Feminine unveils a kind of rainy day, indoor, peaceable kingdom of desultory and idyllic debauchery, masturbatory reveries and hermaphroditic transformations. Klahr's oneric collages graft '70s porn of pallid stubbly flesh flagrantly onto Good Housekeeping/Architectural Digest decor (varicolored crab-orchard stone foyers, modacrylic sunbursts, jalousie windows and orientalist metal scrollwork), interior states where characters despoil themselves in Quaalude interludes of dreamy couplings. In this out-of-touch realm, touching is intelligence gathering for a carnal knowledge that will never attain its platonic ideal. The whole atmosphere is pervaded with euphoria, a hopelessness without despair, a contentment beyond longing. If Klahr's Yesterday's Glue presented an after-hours club world of pining narcissists where the mandatory sex, drugs and rock and roll was glacial if not sinister, Downs Are Feminine presents a world that edges past despondency to become an amoral libertine glade that is at its core abeyant but benevolent.' - Mark McElhatten