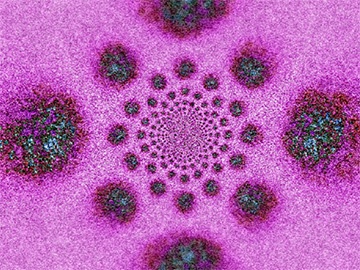 Liess’ irregular atmospheric motion is a meditative acoustic environment featuring shifting drones, resonant tones and frequencies. Liess’ abstract audio-visual compositions derive from artistic traditions of visual and musical minimalism and examine microtonality, structural composition and synaesthesia. Each of his pieces exists as an autonomous generative computer system with the ability to perform and improvise the progression of the work. Once set in motion, Liess’ audiovisual compositions have no clear beginning or end, rather, they exist in a state of infinite renewal.

Bailey’s sound work Five Car Train To Fremont is a live compositional response to irregular atmospheric motion, incorporating samples from Liess’ work as well as field recordings from San Francisco and Oakland. Bailey’s electroacoustic compositions are inspired by ideas and reflections on silence and absence, architectural urban spaces, and feminist activism. Bailey views Liess as an important sonic comrade, having studied and gigged together for numerous years.

This performance represents the culmination of Bailey’s new commission Congregation, a series of live events produced by the ICA. Central to Congregation is the idea of a ‘sonic biography’ – the personal constellation of sounds that form an individual identity. The Congregation series furthers Bailey’s ongoing research into how people use sound to create a sense of place and considers the ways in which communities are formed through the sharing of sounds. Congregation: Performance is preceded by Congregation: Club Night and Congregation: Sonic Round Table.

Ain Bailey is a sound artist and DJ. Her current practice involves an exploration of sonic autobiographies, architectural acoustics, live performance, as well as collaborations with performance, visual and sonic artists. Among these is performance/visual artist Jimmy Robert, who commissioned Bailey to create a composition for his 2017 show European Portraits at PEER Gallery, London. Oh Adelaide (2010), her collaboration with the artist Sonia Boyce, has shown widely, including at Tate Britain; the Whitechapel Gallery; and The Kitchen, New York. In 2016, Bailey was commissioned by Art Basel Miami Beach to compose for the Soundscape Park. Bailey also devised a Study Week at Wysing Arts Centre, Cambridge, which considered the role of sound in the formation of identity. In addition, in 2017, Bailey collaborated with Gaylene Gould on the creation of a Sonic Trail for Tate Britain, London. She also performed at Guest, Ghost, Host: Machine!, the 2017 Serpentine Marathon. Bailey is a research student at Birkbeck, University of London (on a break in studies), and was guest professor in sound at Kunsthochschule Kassel for the winter semester 2017/2018. Following a commission by Serpentine Projects, Bailey is currently conducting sound workshops with LGBTI+ refugees and asylum seekers.
Jockel Liess lives and works in London and studied at the Electronic Music Studio at Goldsmiths, University of London in 2012, and Byam Shaw School of Art in 2000. Liess exhibits his large-scale audiovisual installations and compositions in gallery environments, as well as at festivals and concerts nationally and internationally. In addition to his solo work, he collaborates on a variety of projects with other artists, musicians and filmmakers.