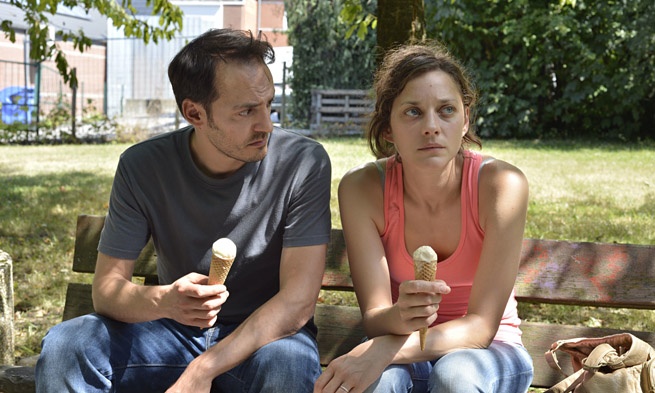 ★★★★★ 'The Dardennes have made a brilliant social-realist drama.' Guardian
★★★★★ 'Political drama at its finest and most humane.' Time Out
★★★★★ 'Elevates ordinary life to art.' Evening Standard
★★★★★ 'Awe-inspiring. This movie is a miracle.' Little White Lies

The understated social drama so expertly played in films such as The Kid with a Bike again infuses this story by the Dardenne brothers. Sandra (Cotillard, Rust and Bone) returns to work after a bout of depression to find that her co-workers have voted her out of a job in favour of a €1,000 bonus. Her boss gives her a weekend to convince them all to change their minds, prompting a series of confrontations and a gamut of emotions – and excuses – that test both Sandra’s ingenuity and her colleagues’ scruples.

Dardenne regular Fabrizio Rongione is Sandra’s supportive husband, and Blue is the Warmest Colour’s Catherine Salée is her confidante. But it’s Cotillard who tugs hardest at our consciences in this affecting parable for harsh economic times.

This screening forms part of Cinemania, a series of inspiring film screenings and talks for young people, taking place at 12 cinemas across London.

The ICA Cinema is now completely ad-free. Please note the feature will start following a selection of trailers and information relevant to the ICA programme.

Cinemania is presented by Picturehouse and Film Hub London. Managed by Film London, the Hub is a proud partner of the BFI Film Audience Network, funded by the National Lottery.