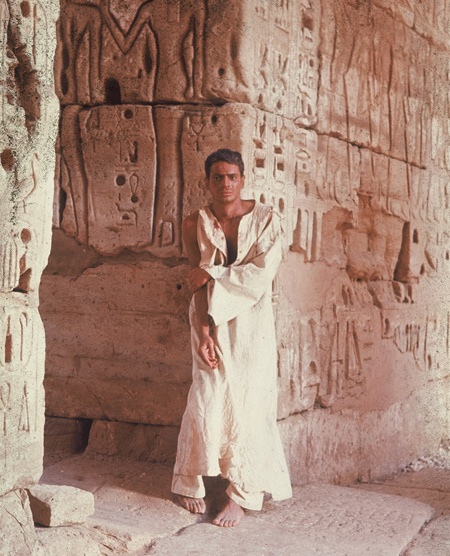 Cinema on the Steps: Curated by Ahmed Mater

The final night of Cinema on the Steps features artist Ahmed Mater's Leaves Fall in All Seasons, a talk with Abdullah AlTurki about his work, and a screening of the newly restored classic of Egyptian cinema The Mummy/The Night of Counting the Years (Al Momia).

This film is made up of mobile phone footage shot by immigrant workers on building sites in and around Makkah between 2008 and 2013. Most of the footage was shot for the benefit of the workers’ families. The files were transferred to the artist’s phone using Bluetooth while other material was originally uploaded to YouTube. Some contributors have asked to remain anonymous.

Considered one of the greatest Egyptian films of all time, Al Momia/ The Night of Counting the Years was recently restored by filmmaker Martin Scorsese’s World Cinema Foundation. Set in 1881, and based on a true story, the film follows two brothers from an Egyptian clan, and their involvement in the looting of a recently discovered tomb, subsequently selling the artefacts on the black market. When one of the clan reports the looting to the Antique Services, underlying themes of Egyptian identity and lost heritage are brought to the fore. Unique for its stylised edits and unusual camera angles, this newly restored print captures the unique archaeological locations and artefacts, all set to an original score composed by Italian musician Mario Nascimbene.

'The carefully measured pace, the almost ceremonial movement of the camera, the desolate settings, the classical Arabic spoken on the soundtrack, the unsettling score by the great Italian composer Mario Nascimbene – they all work in perfect harmony and contribute to the feeling of fateful inevitability. I am very excited that Shadi Abdel Salam’s masterpiece has been restored to its original splendor'. - Martin Scorsese

Ahmed Mater co-founded the non-profit organization Edge of Arabia. Since then his work has attracted an international audience and has been collected by, among others, the British Museum, the Los Angeles County Museum of Art, and the Mori Museum of Art in Tokyo. His art practice, encompassing photography, painting, installation, performance and video, explores the narratives and the invention of radical concepts of urban space in Islamic culture in a transformative era of globalisation and consumerism. It is informed by his daily life as a medical doctor in Abha and his Islamic traditional upbringing framing the issues of contemporary landscape with equal measures of documentation and metaphor. His most recent work combines video, photography and online social activism to present an unofficial and subjective commentary on some of the most contested and poignant transformations taking place in Saudi Arabia today. Mater currently lives and works between Abha, Jeddah and Makkah, Saudi Arabia.