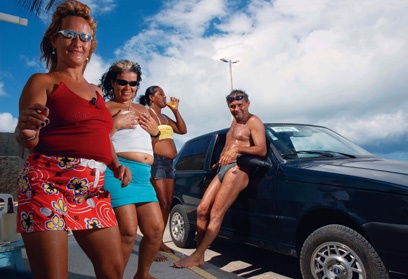 In Bárbara Wagner's photographs of the urban beach of Brasília Teimosa, loud colours, stark shapes and lashings of light depict supposedly flawed standards of beauty, revealing a sense of joy in a world that requires enormous strength of character.

"A Sunday at the beach with music and dancing can bring to light subjects that are rarely dealt with by the media, which flattens and stigmatises the margins of society."

On January 30, 1957, five fishermen from a colony in the North-eastern city of Recife arrived in Rio de Janeiro after having travelled more than a thousand miles by sea over 35 days. Their purpose was to attend the official inauguration ceremony of the newly elected president Juscelino Kubitschek and to ask him for protection, as their community lived under the constant threat of eviction. They returned to Colônia Z-1 by plane, as their inbound experience was described as 'harsh', bringing with them 11 engines donated by the government to power their boats.

This was perhaps the first documented episode in the history of what later became known as Brasília Teimosa, or 'Stubborn Brasília', an urban beach populated by a community that has refused to leave one of the most sought after spots of Pernambuco's capital. Located right between the celebrated beach of Boa Viagem and the historical centre of Recife, Brasília Teimosa is today a real estate hot spot; a natural stretch for the expansion of the international five star hotels that already overcrowd Boa Viagem. It is also the place where shanty town dwellers gather on Sundays with their friends and families to bathe, eat, drink, listen to funk and enjoy the day off.

For almost two years, Barbara Wagner joined them every Sunday and produced a vast amount of photographs documenting a side of the everyday life of the Recife periphery which until then remained almost invisible. An irrelevance to the middle classes who prefer to hang out in more fashionable beaches and a nuisance to the investors who want them to leave so they can exploit the touristic potential of the area, the Brasília Teimosa crowd became the subject of a photo essay that treads the risky path of documenting the disadvantaged. Wagner, who had been working as a professional photographer in journalism and advertisement for many years before undertaking her first personal project, says she was less interested in following a precedent for producing pamphleteering images (in which the subjects are portrayed as victims) than in looking at contemporary urban culture in Recife.

Far from being condescending, her pictures show the sometimes absurd but often purely hedonistic activities that take place in Brasília Teimosa: the man who rides his yellow sports car on the sand, the transvestite who bleaches her body hair accompanied by a little girl or the group of ladies who hang out with a middle aged playboy. For the portraits, Wagner asked her subjects to strike a pose for the camera and used a flash to emphasise the studio experience, though that was the extent of her manipulation. As a result, these images stand somewhere between publicity shots and documentary photography.

Some have a certain aura of glamour about them whilst preserving imperfections such as a trace of lipstick on the teeth or a crooked cigarette between the fingers. Others show a popular strategy employed by many Brazilians, known as the gambiarra. The gambiarras are makeshift arrangements made by people in order to solve problems using what is at hand, like the car with a broken back wheel that became the container of the 'Ultra Som' sound system.

Finally, maybe one of the interesting questions about Brasília Teimosa is how a Western audience will react to this series. It is a work about the periphery of Recife which, on its turn, is a peripheral city in relation to the Brazilian art circuit, where São Paulo and Rio de Janeiro are the centres. Nevertheless, Brazil is still at the margins of the international contemporary art circuit, and there is a tendency to look for the exotic in its artistic production. Whilst the local context is fundamental for placing Brasília Teimosa, it is above all a work about urban life that deals with a tension between centre and periphery experienced in cities worldwide.