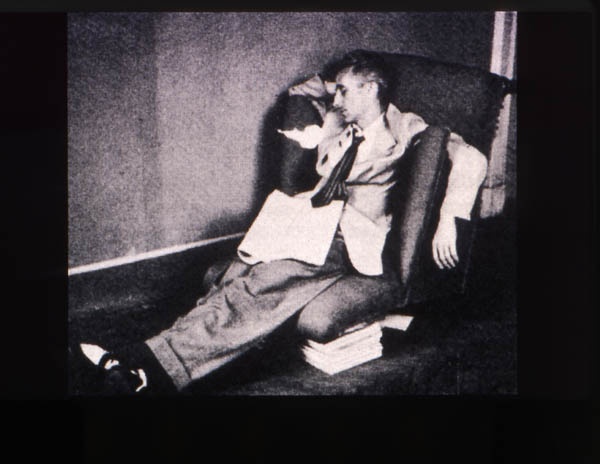 "A mathematician is like a blind man in a dark room looking for a black cat that isn’t there."
Attributed to Charles Darwin

The ICA is proud to present the acclaimed international group exhibition For the blind man in the dark room looking for the black cat that isn't there, which features works by over twenty modern and contemporary artists including still lifes by Giorgio Morandi, a celebrated film by Fischli & Weiss and a sculptural installation by Dave Hullfish Bailey. The exhibition celebrates the speculative nature of knowledge, rejecting the common assumption that art is a code that needs cracking, and presents works that employ nonknowledge, unlearning and productive confusion as ways to understand the world.

Stretching fifteen metres along one of the walls in the Lower Gallery is an installation by Matt Mullican, including drawings, flags, diagrams, rubbings, photographs and prints, and demonstrating the artist's highly subjective theory of everything. Many of the works in the exhibition demonstrate sustained and paradoxical quests for knowledge, and the Lower Gallery also contains a slideshow of photographs by Bruno Munari, showing the artist tirelessly looking for comfort in an uncomfortable chair, and a large-scale installation by Benoît Maire and Falke Pisano which is continually re-arranged over the course of the exhibition.

The exhibition takes its title from a remark attributed to Charles Darwin, who is supposed to have compared mathematical enquiry to the explorations of a blind man. The project also nods to The Blind Man, the journal which was co-founded by Marcel Duchamp, and a re-issue of which (by artist Sarah Crowner) is presented in the ICA's Concourse. Other works here include a game by David William, which encourages visitors to engage with the idea of the fourth dimension, and a large piñata by Mariana Castillo Deball in the shape of a Klein bottle - a topological form whose outside is indistinguishable from its inside.

At the entrance to the Upper Galleries, in an audio recording from 1970, the visitor can listen to Marcel Broodthaers interviewing his cat about the art of painting, while inside the galleries the artist duo Nashashibi/Skaer play with the space between knowing and not knowing in their new 16mm film, Our Magnolia. A final artist who explores collecting and archiving is Patrick van Caeckenbergh, whose works at the ICA include a photo-collage inspired by the fable of a man unable to forget, and who keeps thousands of stories within a large hat equipped with tiny drawers.

For the blind man... is organised by Contemporary Art Museum St. Louis and curated by its chief curator, Anthony Huberman. It is generously supported by Pro Helvetia, Jeanne and Rex Sinquefield, The Andy Warhol Foundation for the Visual Arts, The Flemish Ministry of Culture, Fundación/Colección Jumex and Mondriaan Foundation, Amsterdam.

The exhibition is accompanied by ROLAND, the magazine of the ICA's visual arts programme, as well as by a catalogue, priced at £25