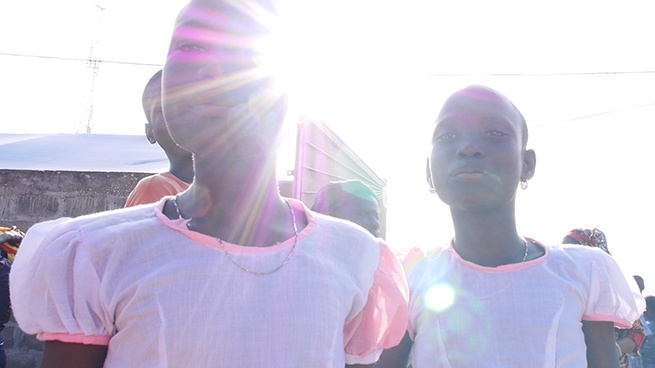 This screening is followed by a Q&A with director Hazel Hill McCarthy III in person and Genesis Breyer P-Orridge, who will be joining the Q&A via Skype.

Bight of the Twin tells the story of musician and artist Genesis Breyer P-Orridge and the Los Angeles-based artist and filmmaker Hazel Hill McCarthy III's journey to Ouidah in Benin to explore the origins of the Vodoun (Voodoo) religion. Transcending assumptions of what it means to be “gendered,” Genesis Breyer P-Orridge and h/er late wife Lady Jaye underwent a series of surgical procedures to become physically identical to one another, seeking to perfect a gender-neutral state through a process they termed 'pandrogyny'.

In Benin, which has the highest national average of twins per birth in the world, twins carry sacred meaning and are venerated as gods. When one sibling passes away, the remaining twin remembers their lost other by carrying around a small, carved replica of their dead brother or sister. During filming, Genesis is serendipitously initiated into the ‘Twin Fetish’ - a practice within Vodoun that honors twins by activating a dead twin’s spirit in order to allow for the living one to remain connected with the one who has passed. Through a series of sacrifices and ceremonies, Genesis reaffirms an eternal bond with h/er late wife Lady Jaye: a deeply interdimensional connection of Western civilization and African ritual.