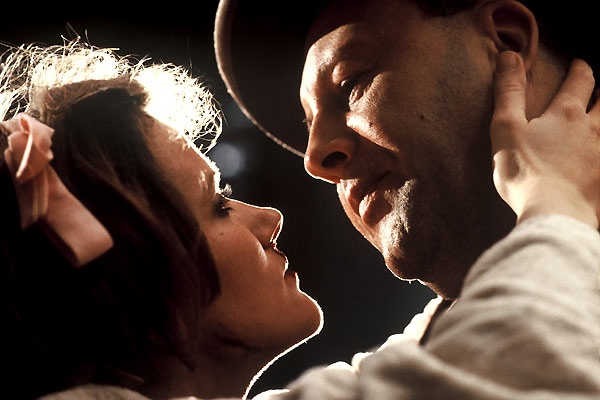 'Fassbinder has created a huge, magnificent melodrama that has the effective shape of a film of conventional length. There's never before been anything quite like it' The New York Times (1983)

'This ICA screening is like borrowing a Rembrandt.' Iain Sinclair on the ICA Blog →
Listen to Iain Sinclair and Chris Petit introducing the opening weekend, and hear Iain interviewed by BBC World Service about this event (starts at 45 minutes).

The physical momentum of the prose in Alfred Döblin’s Berlin Alexanderplatz is exhilarating, like the rush of Walter Ruttmann’s film from the same period, Berlin – Die Sinfonie der Grosstadt. Language and image cut fast. Trains. Bars. Songs. Black marketeers. Whores of all sexes. Surgeons. Detectives. Berlin in the late-Twenties was the world city, city of war-damaged grotesques out of George Grosz and Otto Dix. How dynamic Döblin’s book now seems, an outgrowth of the energies of place, and how muted, in comparison, how lightweight and strategically charming, the Berlin snapshots of Christopher Isherwood, which were laid out between 1930 and 1933.

Isherwood’s material lends itself to Hollywood schmaltz, with his English girl, Sally Bowles, swallowed alive by a full-throttle Liza Minnelli. Berlin Alexanderplatz is scrupulously, sweatily, reimagined and composed afresh by Rainer Werner Fassbinder: a tapeworm epic for our own times, funded by new German 70x70 television money in Cologne. Actors, taken to the edge, perform miracles of choreographed self-exposure. They are crushed but not obliterated by the claustrophobic sets that contain them. And by the troubling memory of a book more honoured than read in a Europe that is not quite prepared to revive it.

Programme
There are two opportunities to see the full Berlin Alexanderplatz programme: on the weekends of 9/10 and the 16/17 of November 2013.

11am - 2pm
8) The Sun Warms the Skin, but Burns it Sometimes Too
9) About the Eternities Between the Many and the Few
10) Loneliness Tears Cracks of Madness Even in Walls

5pm - 8pm
13) The Outside and the Inside and the Secret of Fear of the Secret
14) My Dream of the Dream of Franz Biberkopf by Alfred Döblin, An Epilogue

This screening is part of Iain Sinclair's 70x70 project in which the author curates a season of 70 classic films throughout his 70th birthday year.