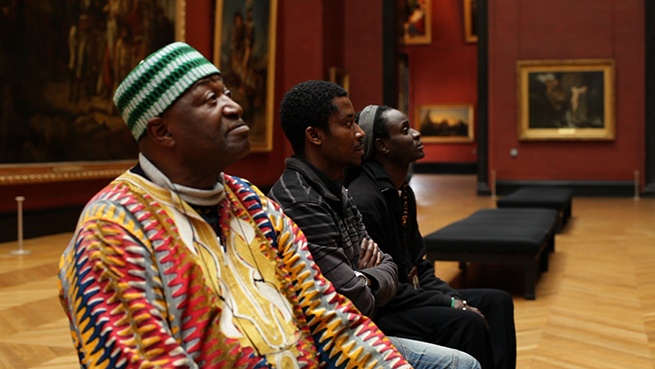 Avant-Noir is an irregular film programme curated by Greg de Cuir Jr that surveys recent work by African and African diaspora film and video artists, alongside those engaging with African cultures. It is rare that we see Black bodies on screens at film festivals and exhibitions, perhaps even rarer when Black artists create those images.

Avant-Noir takes this state of affairs into account and offers unique visions of the international Black experience, while celebrating the presence of artists often excluded from elite institutions and dominant discourse on cinema and the visual arts. Avant-Noir was first presented at the ICA's Artists' Film Biennial 2014, with Volume 2 screened at the ICA in 2015.

The films and videos in the third volume of the series document labour and working class conditions, transform performance with visual abstraction, chart identity through physical and spiritual movement, and question the relevance and role of art in a society that appears to be shipwrecked. For such a society, drowning in unnecessary and hazardous images, Avant-Noir serves as a buoy.

The programme is followed by a conversation with Evan Ifekoya, Karimah Ashadu and Ayo Akingbade

Greg de Cuir Jr is the selector for Alternative Film/Video and Beldocs (both in Belgrade, Serbia). He has organised moving image programs for the National Gallery of Art in Washington, DC, the Museum of Modern Art in Warsaw, Poland, Los Angeles Filmforum, goEast Wiesbaden, Experiments in Cinema in Albuquerque, New Mexico and other institutions. He has published in Cineaste, Jump Cut, Festivalists, Art Margins, La Furia Umana and Politika as well as other journals and volumes.

In 2018 de Cuir and Kevin Jerome Everson are the selectors for the 64th Robert Flaherty Film Seminar. De Cuir received his DPhil from the Faculty of Dramatic Arts at University of Arts Belgrade. He lives and works in Belgrade as an independent curator, writer and translator.