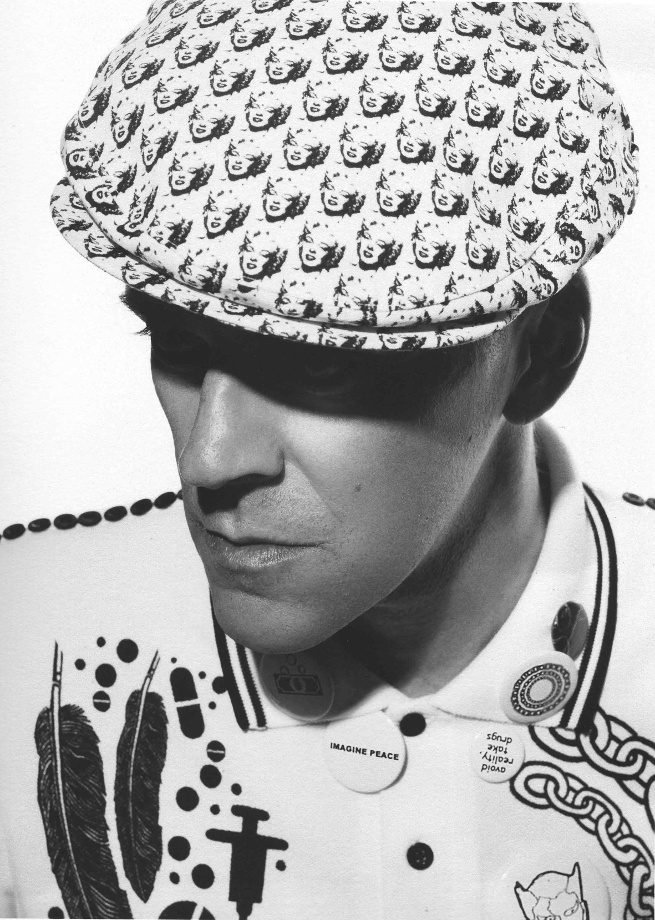 The first major solo exhibition by Judy Blame is accompanied by a group show in which Malcolm Garrett features. Drawing on connections in the art and design worlds in the UK from the 1980s and 1990s, Artistic Differences brings together artists and designers that have been directly linked to Blame throughout his career, and those who have been influenced by his work and share his distinct artistic approach and style.

In the early 1980s Judy Blame’s non-conformist attitude and a desire to distinguish himself within the London club scene motivated him to produce jewellery. His modest resources shaped his DIY approach and led him to incorporate found objects as a foundation for making his adornments; early creations questioned established material hierarchies and were testimony to the harsh realities of industrial and economic decline. In 1985 Blame helped John Moore to set up The House of Beauty and Culture in Dalston, London, a craft collective of like-minded artists including Fiona Skinner, Dave Baby, Fiona Bowen, John Flett, Peter Foster, Mark Lebon, Alan Macdonald & Fritz Solomon (Fric & Frack), Richard Torry and Christopher Nemeth. This collective experience proved to be the first of many important collaborations as a consultant with various designers including John Galliano, Rifat Ozbek, Rei Kawakubo at Comme des Garçons, Gareth Pugh, Marc Jacobs and Kim Jones at Louis Vuitton.

A further significant figure in Blame’s continued growth as a creative polymath was Ray Petri, nexus of the pseudo-corporate fashion collective Buffalo, who encouraged him to focus his talents as a fashion stylist. Blame was soon producing iconic fashion editorials with a range of photographers including Mark Lebon, Mark Mattock, Jean Baptiste Mondino and Juergen Teller for publications such as i-D, BLITZ and The Face. His instinctive ability to create symbolic images that embodied radical elements of popular culture and fashion led to an extensive career in the music industry as an art director and image consultant for iconic figures such as Boy George, Neneh Cherry, Kylie Minogue, Massive Attack and Bjork.

Malcolm Garrett is Creative Director at design consultancy Images&Co, and is widely regarded as a key influence on the development of contemporary British graphic design. As a punk, and while still at art school in Manchester in 1977, he founded the innovative design group Assorted iMaGes, going on to create landmark designs for Buzzcocks, Magazine, The Members, Duran Duran, Boy George and Simple Minds. Moving to London in late 1978, he went on to establish the first design studio, with other like-minded artists and designers, in what was then a derelict Shoreditch in 1983. Always pushing design boundaries, he introduced computers to the studio in the mid-1980s, and subsequently became one of the first designers of his generation to apply himself entirely to interaction and digital design.

It was also in Manchester at that time that he and Judy Blame first became friends, spending time together absorbing and influencing the nascent punk scene. With a similar passion for music, art and fashion, and sharing a rebellious creative spirit they moved to London together and began to explore and exploit their individual design talents in earnest.

Malcolm now splits his time between London and Manchester again, as an Ambassador to the School of Art and as Artistic Director for the annual Design Manchester festival.