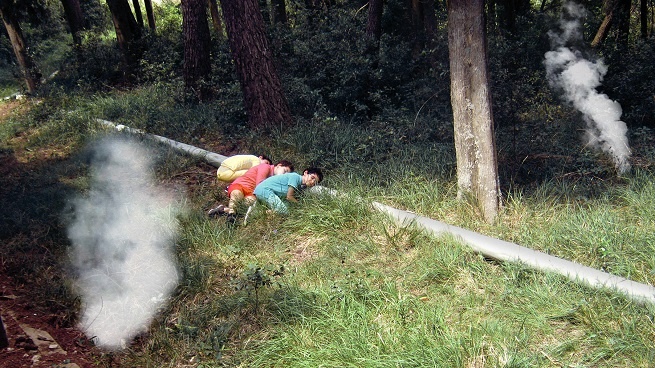 The first in a series of events featuring artist filmmakers in discussion with academics, writers, and cultural commentators about their approaches to disasters, temporality and the politics of futurity. Conceived by curator Yasmina Reggad in collaboration with Dr Rebecca Coleman and Dr Michael Guggenheim, Sociology Department, Goldsmiths, University of London. In partnership with the research project Organizing Disaster, Department of Sociology, Goldsmiths, funded by the European Research Council.

Mikhail Karikis’s long-standing investigation of the voice as a sculptural material and a socio-political agent has influenced him to create audio-visual installations and performances using a variety of media. His work encompasses from poetic to the theatrical where often he joins communities which differ from the mainstream and produces alternative modes of human existence and action. His work has been exhibited widely, including at the 19thBiennale of Sydney, Danish Pavilion, 54th Venice Biennale, and TATE Gallery. His sound works have been published world-wide solo, with Bjork, DJ Spooky and on Sub Rosa Records. Karikis is shortlisted for the 2015 DAIWA Art Prize, his work is currently included in Listening at Bluecoat Liverpool and his forthcoming solo exhibition of new work will open at Tyneside Cinema Gallery, Newcastle in May 2015.

In 2014 his solo show on his project Children of the Unquiet was exhibited at Villa Romana, Florence, Italy. The project involved Karikis working with children from this region to explore and "take-over" a deserted workers’ village that had been created as part of the first geothermal power station in the world. It consisted of seven pieces of work, including a film that will be screened and discussed at this event.

Oreet Ashery is an artist and academic concerned with the appearance of the Political in art, performances of western liberation and freedom, and the nature of events, situations and public platforms.  She is a Lecturer in Fine Art (Studio Practice) at Goldsmiths, and has been a Visiting Professor at the RCA, Honorary Research Fellow and an AHRC Creative Research Fellow at Queen Mary. In 2014 she is Fine Art Fellow at the Stanley Picker Gallery, Kingston University.

David Oswell is Professor of Sociology at Goldsmiths. His research focuses on the sociology of childhood, science and technology, cultural studies and social theory. He has published widely on childhood, including on the relationship between infancy, politics and sound. His most recent book is The Agency of Children: From Family to Global Human Rights (2013: Cambridge University Press).

Rebecca Coleman is Senior Lecturer in Sociology at Goldsmiths where she researches and teaches on visual and sensory sociology, temporality, the present and future, bodies and inventive research methods.  She convenes the MA in Visual Sociology.