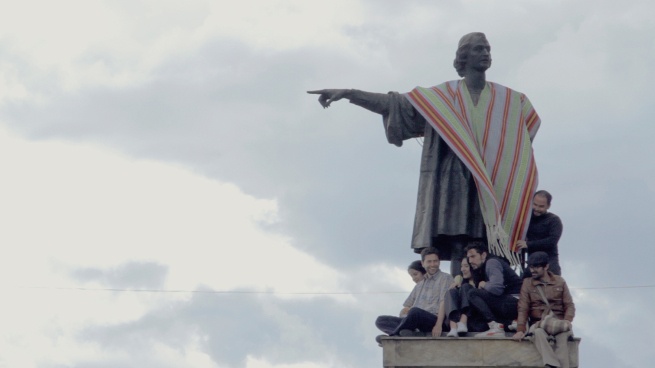 Please note that the start time has changed for this event, which will now begin at 8.15pm.

The last in a series of events featuring artist filmmakers in discussion with academics, writers, and cultural commentators about the approaches and methods they use to explore temporality, disasters and the politics of futurity. Conceived by curator Yasmina Reggad in collaboration with Dr Rebecca Coleman and Dr Michael Guggenheim, Sociology Department, Goldsmiths, University of London. Supported by the European Research Fund Organising Disaster. Civil Protection and the Population Starting Grant and the Methods Lab, Sociology Department, Goldsmiths.

The series also includes a workshop and performative dinner at Delfina Foundation, a Methods Clinic at Goldsmiths University, London and a one-day workshop and seminar at Tate Modern.

Iván Argote’s practice deals with the way that man relates to the myriad changes that take place in the historical, economic, political and cultural realms. Argote aims to question the role of subjectivity in the revision of these concepts and develops methods to generate reflection about the way we construct certainty in relation with politics and history. He creates interventions and performances designed for the public space, which are often further developed through a variety of mediums such as video, installations, photography, sculpture and painting.

La Estrategia is influenced by clandestine communities of revolutionaries operating in Bogotá in the 1970s. Traveling between Bogotá and the jungle, the film reveals the visual journal of a mirror community of youngsters living in Colombia today. Based on the artists’ family folklore and collected anecdotes, the group re-enact the everyday reality of these past cellular groups which consisted of physical and mental exercises that expressed their commitment to the collective and prepared them for the coming revolution.

He was awarded the CIFO Grant – Cisneros Fontanals Art Foundation 2015, Audi Talents Awards, 2013 and SAM Art Projects, 2011, among others.

Alberto Toscano is a Reader in Critical Theory at the Department of Sociology, Goldsmiths, University of London. He sits on the editorial board of Historical Materialism and edits The Italian List for Seagull Books. He is the author of The Theatre of Production: Philosophy and Individuation between Kant and Deleuze (2006), Fanaticism: On the Uses of an Idea (2010) and is the translator of several books by Alain Badiou, Antonio Negri and others. He recently co-authored with Jeff Kinkle Cartography of the Absolute.

Benjamin Kunkel is the author of the bestselling novel Indecision and a founding editor of n+1. He writes for the London Review of Books and Salvage, among others. He recently published Utopia or Burst: A Guide to the Present Crisis and Buzz, a play.

Yasmina Reggad is an independent curator and writer based in London. She holds an MA in Middle Ages History from the Sorbonne University and is presently Programme Curator at aria (artist residency in algiers) and Exhibition and Projects Manager at Delfina Foundation. Reggad’s research focuses on the politics of futurity, as well as on alternative models of art education. Her recent curatorial projects include a commissioning and curating a series of performances at Delfina Foundation, UK and at DJART Biennal, Algeria. She conceived the 6-month series We Can’t Be There. Emergency Provisions for (Un)Anticipated Futures in collaboration with Dr Rebecca Coleman and Dr Michael Guggenheim. She will be in residence at HICP – Helsinki International Curatorial Programme in August 2015.