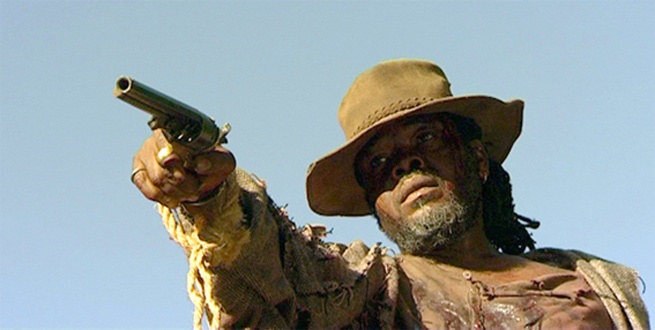 Trail of the Spider transposes Western genre motifs and the suppressed racial history of the American West (where one in three cowboys were black or Mexican) onto the transforming landscape of East London. Questioning and re-imagining the Western’s portrayal of the 'Vanishing Frontier', the film extends the metaphor to the material and psychological conditions of a present day city increasingly dominated by volatile financial speculations and private interests.

Recreating the panoramas of the Western on landfills, wastelands and gravel pits linked to the construction of the 2012 Olympic Park and featuring a large cast of actors and non-actors, the film's dialogue is rooted both in historic sources and the collective experiences of the players and filmmakers (linked in many cases through political activism, friendship and shared experiences of East London).