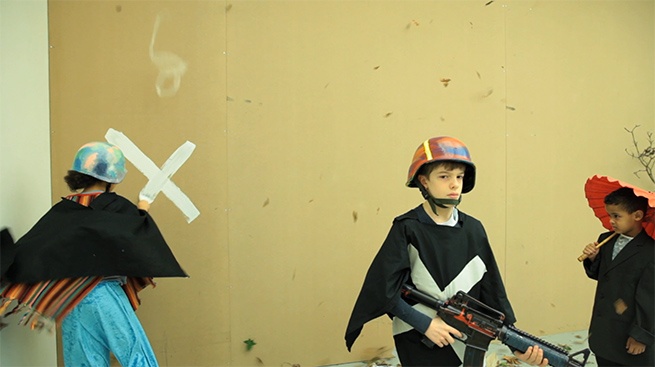 Join us for the UK premiere of Tobias Madison’s das blut, im fruchtfleicsch gerinnend beim birnenbiss, followed by a conversation with Tobias Madison on collaborative approaches to filmmaking.

Madison often works with video and installation, combining sculptural attitudes with theatrical experiences; for das blut, im fruchtfleicsch gerinnend beim birnenbiss (Blood, Clotting in the Flesh of a Pear while Biting), he worked with a cast of children and pedagogues in Hannover, Germany to complete his new video. Taking the late-Japanese filmmaker Shuji Terayama’s 1971 film Emperor Tomato Ketchup as a starting point, Madison's narrative is located between the child as a projection space for politics and the child as a parody of politcs, so that overthrowing the adults becomes a doubtful endeavour in this fictional, pseudo-scifi tale.

The collaborative process employed by Madison in making the film with a group of children took comparable alternative power dynamics to unusual effect. Both visually enticing and subtly complex in its narrowing of artistic and generational hierarchies, Madison’s work serves as a catalyst for discussion and debate on creative process, production and collaboration.