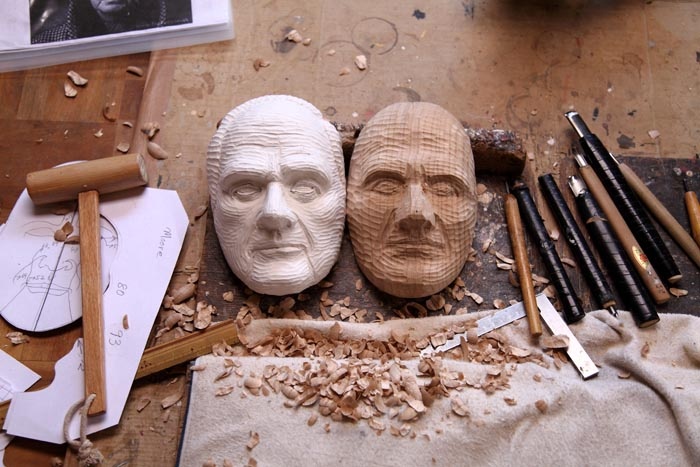 Simon Starling's recent film Project for a Masquerade (Hiroshima) recounts the drama of the making of masks for Japanese Noh theatre—tracking each stage of the sixth month long process. Filmed within the confines of the maskmaker Yasuo Miichi’s modest studio, the cast of characters is assembled for a proposed performance of the 16th Century play, Eboshi-ori; the story of a young noble boy who, with the help of a hat maker, disguises himself to escape enforced exile and begin a new life in the east of Japan. When populated by the assembled cast, this tale of personal reinvention, serves to mirror the complex Cold War saga that surrounds the double life of Henry Moore’s multifaceted sculpture Atom Piece (1963-65).

Project for a Masquerade (Hiroshima) is part of a wider body of work first shown at the Museum of Contemporary Art, Hiroshima, Japan, in 2011 and more recently at Kunsthal Charlottenborg, Copenhagen, 7 October 2011–22 January 2012 alongside other recent works.

In 2011, Simon Starling also had solo exhibitions at Tate St. Ives, Cornwall and Galleria Franco Noero, Turin. He was included in the 6th Nordic Biennial (2011) and “Altermodern” the Tate Triennial (2009). Starling’s concept driven practice investigates the histories and narratives imbued in objects and places, retelling or reshaping them in new forms. Shedboatshed (Mobile Architecture No 2) (2005), a work included in his Turner Prize winning exhibition in 2005, exists as the remains of a wooden shed transformed into a boat, sailed down the river Reine, dismantled and resembled as a shed in the gallery. This method of transformation and reconfiguring is common in his work—in Project for a Masquerade (Hiroshima) these expansive narratives are explored to new lengths.

Actor, writer, director, and founder of theatre company Complicite, Simon McBurney, has written, directed and acted in more than 30 productions for the company, most recently The Master and Margarita which will be seen in London in March and Shun-kin for which he was the first non-Japanese director to receive the Yomiuri Theatre Awards Grand Prize. Other recent work includes the opera A Dog’s Heart, De Nederlandse Opera, Amsterdam and ENO. Other directing includes All My Sons and The Resistible Rise of Arturo Ui. McBurney also performed in the feature films Tinker Tailor Soldier Spy, Jane Eyre, Body of Lies, The Duchess, The Golden Compass, The Last King of Scotland, and Friends with Money. He was most recently seen as the archdeacon in the award winning BBC TV comedy Rev.

Presented in association with London Consortium and supported by Creative Scotland.