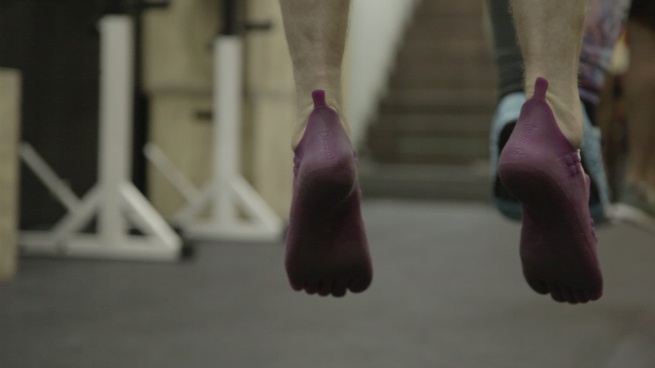 This screening accompanies the Bloomberg New Contemporaries 2015 exhibition and is selected by participating artist Jasmine Johnson. Looking at the synchronicity between globalisation, real bodies and subjective identity in the context of invisible networks, the characters within these works are some of the many millions of inhabitants of ‘liquid modernity’, connected to the global machinery of production and consumption.

The video is based around the recording of a live choreography workshop involving amateur Romanian dancers and acting students at the Periferic 8 Biennial of Contemporary Art in Iași, Romania in 2008. Led by renowned Swedish choreographer Anna Vnuk, with whom Billing last worked over a decade before, there is no final performance as such: the resulting video weaves several days’ activity into a continuous process of live improvisation between choreographer, dancers and local musicians, watched by an audience who were free to come and go. The project was an attempt to explore, along with the participating individuals and the audience, what contemporary choreography can be, or means today, especially in the cultural context of the small city of Iași where there are few opportunities to enter the field of contemporary dance. With a nod to choreographers like Yvonne Rainer's explorations of everyday movement, Billing investigates the sense of having a body and how we perform our being. Paying tender attention to small details, Billing focuses the mind on the social body - the body among others, the body aware of itself. The work’s soundtrack is a combination of the improvised live music performed at the event in Iași, and a version of the song ‘My Heart’ (originally written and performed by the Swedish drum and vocal duo ‘Wildbirds and Peacedrums’ in 2009), reinterpreted by Johanna and a group of fellow musicians in a Stockholm studio. The final video was created through a lengthy post-production editing process, in which the dancers’ movements, the activities taking place around them, and the rhythm of the music are reconstructed into a new choreography – perhaps closer to the everyday struggles and surrounding obstacles than might first be imagined – including climbing over institutional structures and running through hierarchical corridors.

With thanks to Johanna Billing for supplying the above text

Produced in collaboration with Camden Arts Centre, London; Arnolfini, Bristol and Modern Art Oxford as part of the 3 Series: 3 artists, 3 spaces, 3 years, and in the frame of Periferic 8 - Art as Gift Biennial for Contemporary Art Iasi, Romania, organized by Vector Association with support from IASPIS, Sweden.

Thanks to the video department at University of Art "George Enescu” for providing equipment, Theodor

Before filming began, Lucy gave the actors a presentation about the history of the Federation of Worker Writers and Community Publishers (FWWCP) and Chris Searle, the school teacher from Stepney, who published a book of his pupils’ poetry about experiences of living Bethnal Green in 1971. As a result, he was fired because the book was published prior to the school governors approval. In response eight hundred pupils went on strike. These events led to the founding of the FWWCP a peer-led national network who have supported each other to publish for the last 40 years. This is where Lucy began the research for Writers’ Group.

Character descriptions with details about occupation and attitude were informed by her research into the individuals associated with the historic movement - you don’t tend to sit down to write but bits of lines come to you and you jot them down - and - you feel anxious to stay out too late for your sister’s sake. The poetry and prose recited in the video was written by the actors themselves, whilst in character. Lucy’s control over the broader themes within the dialogue was enacted through triggers given to individuals like the directive to talk about ambition. The camera avoids interpreting and instead hovers over the shoulders of the participants, eagerly capturing improvised exchanges between writers and the gestures that substitute talk. Lucy’s filmmaking is controlled in its composition and technique, fearlessly enhancing the palpable atmosphere of unease as the participants engage in the necessary trust and openness to respond to each others’ creative outlets.

P. knows how to build fires using local tinder in any part of the world. He values his time in nature - when you are alone, no matter how frustrated you feel, you have no choice but to rely on yourself and to keep going. In the Reebok Crossfit gym in a basement in New Delhi, P. enjoys sharing space with other individuals on an equivalent trajectory. His job as a software engineer at a global banking corporation requires that his working days are spent looking at screens and applying ‘patches’ to computer networks. We met at a Moroccan themed expat party, at the Rralas Habibi on the roof of Saket Mall. He told me that he sends $10 per month to a political project in the US who are trying to amass 20,000 people with one thing in common, which is that they are ‘freedom-minded’. He told me that they will move there and create a new society. So far there are 1000 residents who drive around in cars with bumper stickers saying ‘Live Free or Die’. People attend ‘gun-church’ every Sunday, where they can practice firing their guns at a shooting range. P. told me that he has downloaded the .cad file for the 3D gun.

Ian, 36, is not present. His escape is a composite story carefully constructed from activities and testimonies of cases in a research dossier into the experiences of people who have gone missing, entitled Geographies of Missing People, 2013. On stage, these details are rehearsed and relived by the three volunteers who function as our singing narrators, piecing together a psychological picture of the missing person. Ian goes to the places he knows, to avoid looking lost and he prefers the quiet streets. As the volunteers imagine the absent protagonist’s journey into the untethered world, the particularities of their insights reveal to us that this escape story is not just about Ian. Edward works with actors to fit roles that he predetermines. Here, a gay man, a leader and an optimist are cast and developed in workshops. Relations and frictions between characters are discussed - their characters can move - Edwards tells me. An emphasis is placed on the objects surrounding the disappearance, and how they are are enlisted and deactivated to constitute escape. What are the mechanics of leaving? Part of a broader body of work about managing the problems of everyday life, Escape Routes poses an amplified question about the possibility of opting out of everyday life, altogether.