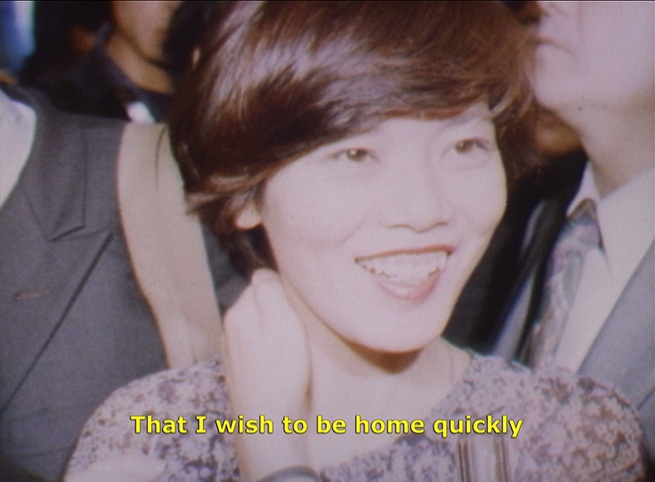 Following the screening Naeem Mohaiemen will be in conversation with Nada Raza, curator of The Missing One.

September 1977. The Japanese man speaks in halting English; the Bangladeshi negotiator with the clipped confidence of an army officer. A colour scheme suggests order in the exchange: green, red, and the occasional white. But underneath the schema of a dark screen—subtitle sans image—lies a waiting unravelling. The Japanese Red Army had attached to the Palestinian cause, and through that to an idea of global pan-Arabism. But the high-value hostage turned out to be an Armenian banker from California, and the Democratic Party Congressman on honeymoon negotiated a call to the White House only to be greeted by Jimmy Carter’s answering service. The hostage terrain was not an “Islamic Republic,” as the hijackers thought, but a turbulent new country ricocheting between polarities and imploding in the process.

Instead of being the willing platform for the Japanese Red Army’s ideas of “Third World revolution,” the actual Third World hit back in unexpected ways, turning the hijackers into helpless witnesses. The lead negotiator, codename “Dankesu,” says with baffled understatement and halting English: “I understand you have some internal problems.” An eight-year-old watches the television screen with growing confusion – the screen shows an unmoving control tower for hours on end, and he wants his favourite show to start again.

United Red Army premiered at the Sharjah Biennial in 2011. Sarinah Masukor described the film’s structure, specifically the archival images, as “ever on the verge of collapsing into abstraction, their materiality performs the indeterminacy of the event they record” (West Space).

Naeem Mohaiemen will also present a talk on 18 November at Delfina Foundation: When Zindabad carries many meanings: On Muhammad Ali’s Bangladesh Passport. This talk presents a reading of Ali’s 1978 Bangladesh trip through key texts, revealing suppressed aspects of the histories Black and Muslim Internationalisms.