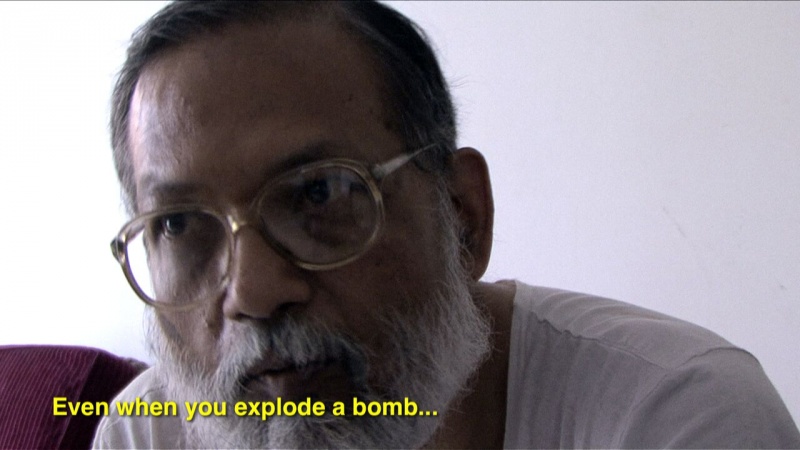 Following the screening Naeem Mohaiemen will be in conversation with Shumon Basar, co-author of The Age of Earthquakes: A Guide to the Extreme Present.

January 1974. Or, Autumn 1977. Now, in a Dhaka flat, historian Afsan Chowdhury writes diary entries in the form of magazine editorials. A voracious reader, he soon wearied of radicals who considered debate a waste of time; they thought the dialectic struggle could be short-circuited through the barrel of a gun. As with other times in this country’s short life, they misjudged the flow of water and history. Chowdhury uses the third person as a distancing device, and through stories of being a long-term diabetic, his time in exile (or immigration) in Toronto, and his navigation of the debris of a nation trapped by the past, he returns to the long day when he almost died. The men in uniform wanted to execute him after they found the Marxist pantheon in his library. “They thought I wrote them after I said so; I probably fit into the visual imagination of a radical. Beards are never trusted on young men. I argued with them about searching our house.” What else do you need to identify an enemy?

The second film in the Young Man Was series premiered at Museum of Modern Art, New York, and is inspired by Afsan Chowdhury’s diary – which also provides the series’ eponymous phrase, “the young man was … no longer a terrorist.” The accumulation of multiple memorials to the period was described by Kaelen Wilson-Goldie as a “revolutionary past meaningful in the sudden eruption of a revolutionary present”.

Naeem Mohaiemen will also present a talk on 18 November at Delfina Foundation: When Zindabad carries many meanings: On Muhammad Ali’s Bangladesh Passport. This talk presents a reading of Ali’s 1978 Bangladesh trip through key texts, revealing suppressed aspects of the histories Black and Muslim Internationalisms.