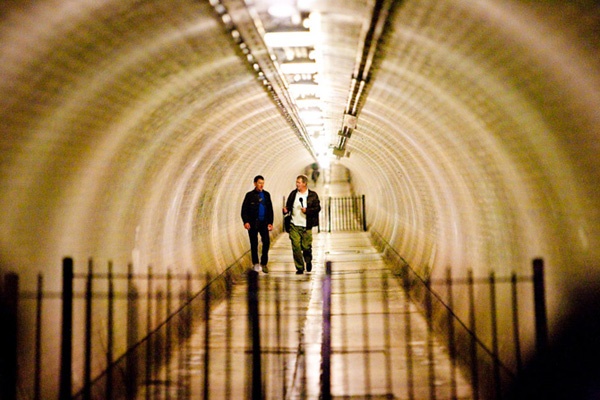 Memory Marathon is an 80 minute film of a large-scale participative event in which artist Simon Pope walked a 26 mile marathon route through the five London boroughs that went on to host the 2012 Olympic and Paralympic Games. Pope completed his journey in the company of over one hundred local residents in an unbroken relay. Each participant contributed a personal recollection from Olympic history, before passing the 'baton' of the microphone to the next person.

Continuing a series of trademark walking and memory projects by Pope, Memory Marathon is a unique collective undertaking that celebrates the enduring importance of personal memories.

Following the screening artist Simon Pope will be present for a Q&A.

To coincide with Simon Pope’s Memory Marathon, there is a screening of A Clockwork Orange on 3 September.

Memory Marathon was conceived and produced by Film and Video Umbrella, commissioned by the Olympic Delivery Authority and funded by the London Development Agency and Arts Council England.

This screening is part of a weekend of activity which includes In The Zone, a symposium at the White Building on Sunday 8 September which considers how the sports phrase 'in the zone' can be applied to other aspects of contemporary life.