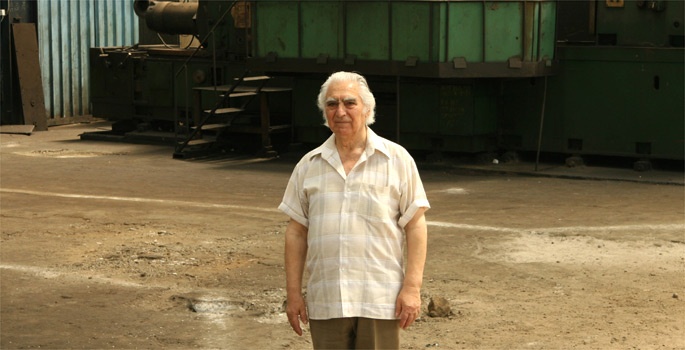 This month's Artists' Film Club premières new work by Matei Bejenaru and Dan Acostioaei, members of the Vector Association. Matei Bejenaru's short documentary Battling Inertia (2010), tells the story of the founding of a poetry club at the C.U.C. - Industrial Platform for Steel Processing in 1973. Returning to the factory after 20 years of retirement to visit the library he created, Tacu also meets with the small fraction of the work force that remains employed on site. Through the perceived lapse of time and its contrasting social and political positions, the film opens deep nostalgia in the protagonist, the filmmaker and potentially the viewer.

In much of his practice, Dan Acostioaei addresses the resurfacing of the Romanian Orthodox Church following the events of 1989. His new video work, What Goes Around (2011) enacts an image of three middle-aged businessmen seated on a rotating ski lift, as they futilely perform a vague blessing ritual. Through this scene, Acostioaei addresses the cultural condition in Romania, where moral ambiguity is no longer the exception as you move between different social spaces.

Vector Association’s activities, from exhibition and education programmes to research and publishing activities, are analyzing the relationships between the art and visual culture practices and the socio-political context.