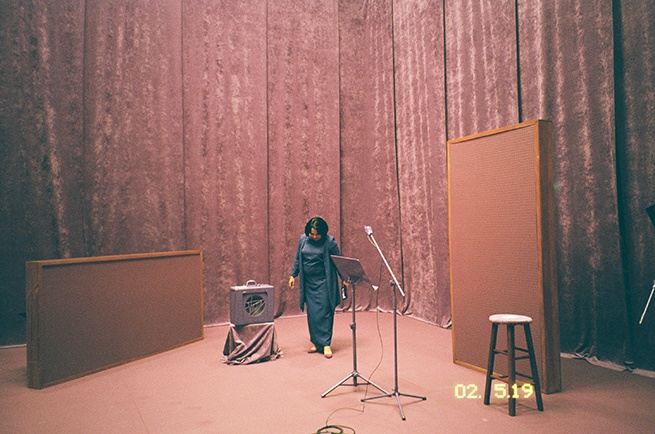 Shot on location in Los Angeles, Chicago and Clarksdale, Mississippi, the new feature-lenghth work by artist Maritine Syms travels from the rural South to the Northeast, Midwest and West, following routes of the 20th century Great Migration of African-Americans. Girl, the central character, is depicted in her daily life, and as she interacts with WB (White Boy) in person and over instant messenger. This multi-location narrative is never overtly region-specific, yet is psychogeographic in origin. Similarly ambiguous, the camera occupies multiple vantages in the film including WB, the interviewer and the omnipotent observer, serving to chart the ways we document ourselves and the lives of others.

While the chameleon-like role of the camera as silent observer deflects Syms's role as director, her presence can still be felt off-screen, and in a brief cameo appearance. Interweaving biographical narratives with fiction, she offers empowering interludes from Queen White, who delivers motivational monologues to the camera from a purple room, providing a soundtrack to Girl’s anxieties and meditations. Using purple as a signature device in many of her works, Syms refers to Alice Walker's 1982 novel The Colour Purple: a recurring motif and reminder of the underlying oppressive racial structures, and their origins, in the United States.

Following the 2 November screening, Martine Syms joins us for the European premiere of her first feature-length work, and will be in conversation with Steven Cairns, ICA Curator – Artists' Film and Moving Image

An Interview with Martine Syms

In the run up to the screening Syms shares some background on the new work in a short conversation with ICA Curator of Artists’ Film and Moving Image, Steven Cairns.

There are many subtleties to Incense Sweaters & Ice from cultural signs and signifiers to psycho-geography, but I want to first ask you about the title. Where does it come from?

The title is a reference to Altadena, California, the part of Los Angeles where Girl, the film's main character, was raised. The unincorporated area sits at the base of the Foothill Mountains. It was originally developed for vacation property. There were many farms and three factories. The goods manufactured in those factories were incense, sweaters, and ice. In the 60s the area began to diversify as it was one of the few communities without discriminatory housing covenants. As a result, Altadena is one of the most racially mixed communities in Los Angeles. It's my hometown.

What led you to make something feature length? Was it always your intention and do envisage the piece to be something that could function in both gallery and cinema environments?

I began working on the film knowing it would be part of an exhibition at the Museum of Modern Art, New York. I make art to think about the historical, economic, and social structure that shape culture. I love working with existing conventions. Every viewer is already bringing their experiences to the work. I want to use those conventions and behaviours as material for my piece. I wanted to reference the institution of film. What is required for a movie to be feature length? Is it just duration? Do you need characters? Does something have to happen? I started using this phrase ambient cinema to describe how I was working. Like ambient music, it allows for varying levels of engagement. I've also called it an art mumblecore film, but I was sort of joking.

How do you consider Incense Sweaters & Ice in relation to your other video pieces and more broadly your gallery-based work?

My work has long been concerned with the divide between public and private spheres, and how people, particularly black women, navigate this divide. In many ways, my short films, lectures, and writing over the past five years have culminated in this piece. It's a larger scale exploration of how cinema can be used to record (non)performance, lies, and other narratives. This piece shares many of the same themes I was working with in Fact & Trouble, my solo exhibition last year at the ICA.

Do you consider the piece to be autobiographical? The scenes where Girl is buying photographs, for instance, is reminiscent of other aspects of your practice.

No. I adapted the script from Misdirected Kiss (2016), which was an autobiographical performance. I created scenes out of the anecdotes that I describe in that piece. Although some of those stories didn't happen to me exactly how I said anyway. We all exaggerate and selectively remember our experiences when retelling. That's what makes it interesting. If I start with something from my life, I am very precise about form.

Could you talk a little bit about your use of locations and why you chose them?

I shot the film on location in Clarksdale, Mississippi, St. Louis, Missouri, and Los Angeles, California. The film traces the Great Migration in reverse, considering how Girl is impacted by her forebears' move West. The film is concerned with psycho-geography, or how our built environments impact our emotions and behaviours. I was very influenced by Jacqueline Stewart's writings on the relationship between cinema and the Great Migration, as well as Isabel Wilkerson's historical survey of several families' journeys. My family migrated from the delta to the Midwest, to the west coast, among other places. I lived in Chicago for several years and wanted to use the musical history of blues, northern soul, and acid house as motifs that paralleled this movement of many bodies. I was thinking about driving on Interstate 55. I chose Clarksdale because Muddy Waters and Sam Cooke, as well as a bunch of other important musicians, are from there. It's where Robert Johnson sold his soul to the devil.

The film's narrative features motivational interludes from Queen White, where did the inspiration for this character come from? In the film Girl recommends some motivational podcasts, is this an explicit connect, is it motivational advice for the audience?

Queen White is another character in the film. I don't see those scenes as interludes. I think of them as another voice considering the same topics as Girl, though perhaps in a different time, space, consciousness. When I first wrote the character, she was Girl's great-aunt, but in the edit, her scenes turned into a dream space. Queen is a combination of my great aunts, my godmother, and Maxine Powell, director of Motown's finishing school. Her words aren't motivational to my ears. From the time we're toddlers, to probably old age, women get a lot of conflicting messages about how they are supposed to behave, look, feel, think, so on and so forth, especially if they want to "succeed". This pedagogy is clear evidence of the large structural inequalities we experience. I wanted to play with this voice. Nicole Otero, my editor and an incredible director herself, and I spent a lot of time discussing the idea of an omniscient female narrator. We kept using the word multivocal. Throughout the film you hear Missy Elliott, Tara Brach, my mom, etc. speaking, we were pretending they were one voice.