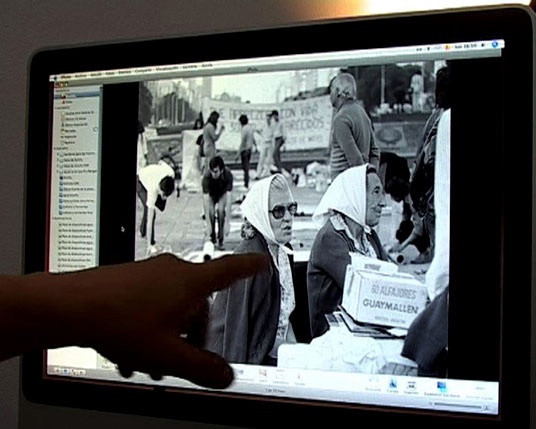 Due to unforeseen circumstances, this event has been postponed until further notice.

During the course of the Chto delat? exhibition the ICA cinema hosts a weekly screening event addressing filmmaking which exists at the intersection between art, and social and political activism. This week the ICA is pleased to present the UK premiere of Not Reconciled (Nobody Knows What a Body is Capable Of) (Dir Marcelo Expósito, 2009), followed by a conversation between Expósito and artist and activist John Jordan.

Marcelo Expósito is an artist whose practice encompasses filmmaking, curating, teaching and editing. Not Reconciled forms part of a series of films by Expósito – with the collective title Between Dreams – that are dedicated to exploring the rise of the global movement, as well as new metropolitan social movements. The film centres on forms of activism that developed in 1990s Argentina, with a newly politicised generation campaigning for justice for the families of those that ‘disappeared’ during the military dictatorship in Argentina that came to an end in 1983. Not Reconciled aims to show that Argentina has, for decades, experienced conflicts and struggles around forms of memory and justice, where tools of artistic and creative expression inherited from the tradition of the avant-gardes have played an important role in modeling the social movement.

John Jordan was co-director of interdisciplinary social practice art group Platform (1987-1995) and co-founder of the infamous direct action collective Reclaim the Streets (1995-2000). He co-edited the book We Are Everywhere: The Irresistible Rise of Global Anticapitalism (Verso – 2003) and had the foolish idea of the Clandestine Insurgent Rebel Clown Army. He is currently co-authoring a film-book which explores Utopian experiments in Europe with the Laboratory of Insurrectionary Imagination.

→ Not reconciled
→ Laboratory of Insurrectionary Imagination