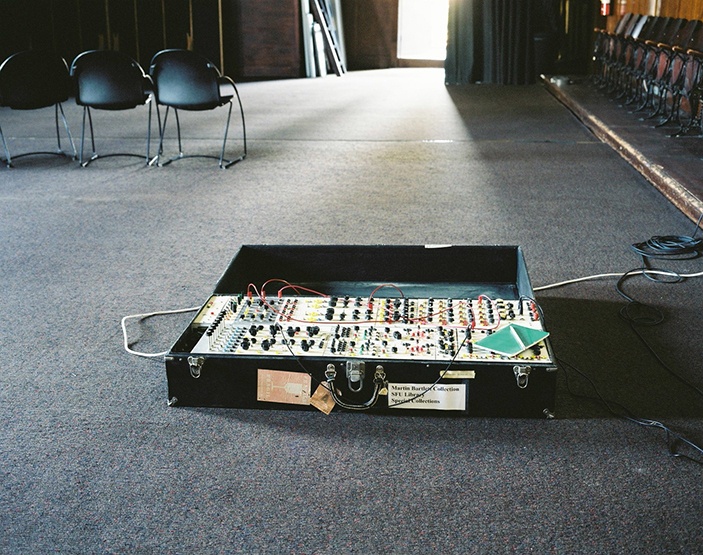 Electro-Pythagoras (a portrait of Martin Bartlett) (2017) is artist and filmmaker Luke Fowler’s profile of Martin Bartlett, an electronic music composer who conducted pioneering experiments with microcomputers in the 1970s and 1980s. Born in Croydon in 1939, emigrating to Canada with his family when he was thirteen, Bartlett’s life was cut short in 1993 during the AIDS crisis. Despite his prolific and significant career of experimentation and collaboration, his work remains little known.

The film takes its title from the 1993 release Pythagoras’ Ghost, in which Bartlett philosophically explores musical and mathematical principles. Alongside footage with recordings of Bartlett from various sources, both video and audio, Fowler interweaves self-shot 16mm footage, filmed in and around the archives that hold Bartlett’s recordings and personal effects, and at The Western Front, a multi-disciplinary arts run space co-founded by Bartlett in Vancouver. The film is narrated throughout with readings of Bartlett’s letters, charting his experiences as an electronic composer and gay man living through the AIDS crisis in Canada.

Part-portrait, part rumination on loss, Fowler carefully explores the relationship between the memory of Bartlett and the precarity of the technologies that Bartlett used to make his compositions. Sifting through his correspondence, photographs, writings and notebooks, Fowler guides us through a memoriam of Bartlett’s personal and professional lives, the legacy of his musical experimentation and his influence on musicians today. Electro-Pythagoras (a portrait of Martin Bartlett) features numerous unreleased recordings of Bartlett’s music (including the posthumous album Burning Water) alongside rare footage from performances and interviews.

Electro-Pythagoras (a portrait of Martin Bartlett), was commissioned by Sonic Arts Festival/ Stedelijk Museum, Amsterdam and The Western Front, Vancouver. Luke Fowler (born 1978) lives and works in Glasgow. Recent solo exhibitions took place at Neubauer Collegium for Culture and Society, The University of Chicago (2016); Outside The Sound, Harvard Film Archive, Cambridge (USA); and Computers and Cooperative Music-Making, Whitechapel, London (with Mark Fell) (2015) among others. His work has been included in numerous group exhibitions and screenings.