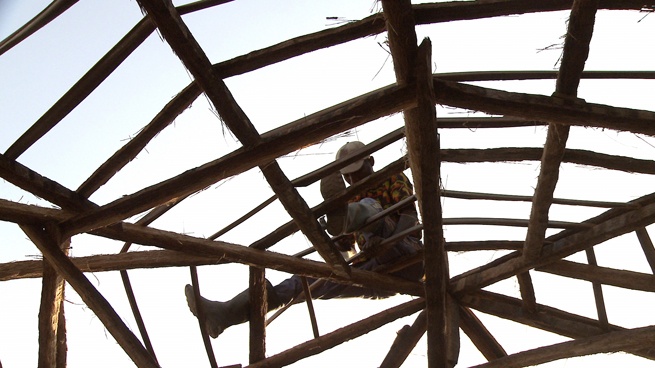 This series of films investigates the legacy of colonialism in Portuguese-speaking Africa. Tracing connections between the architecture of five African republics, the films reflect on the ways in which modernity was developed, absorbed and sometimes rejected in these countries.

Following the screening Paula Nascimento and Stefano Rabolli Pansera will be in conversation with curator Filipa Ramos and artist Kiluanji Kia Henda.

The legacy of Portuguese empire building pervades the postcolonial discourse that attempts to explain the development of the modern nation state in Portuguese-speaking Africa. It is with this historical and linguistic connection in mind that Ilha de São Jorge is thematically and structurally created. Although geographically distant, these countries share a heritage with each other and with Portugal.

The cities and urban forms are a result of methods, techniques and procedures that can be linked with a common historical past, tied to a Portuguese matrix yet at once deeply related to specifics of geography, culture and traditions. This shared postcolonial heritage makes it relevant to develop a coherent discourse on the similar ways these countries have declined or absorbed modernist architecture. Bringing the countries' architectural discourse together for the first time, not only highlights their connections with Portugal, but more importantly, highlights the internal connections, often neglected, that contributed to the development of a modernist discourse.

Ilha de São Jorge is a project by Beyond Entropy Africa

Beyond Entropy is a not-for-profit research based company practicing architecture, urbanism and cultural analysis, originally developed by Stefano Rabolli Pansera. Beyond Entropy uses the concept of Energy as a tool to conceive new forms of architecture beyond the rhetoric of sustainability and operates at the threshold between art, architecture and geopolitics on a global level, in association with public organizations, private institutions and governmental agencies in three territories: Africa, Europe and the Mediterranean. Beyond Entropy operates while developing curatorial activities, art installations, architectural interventions, master-plans, public debates and publications.

Filipa Ramos is an art writer and curator based in London, where she works as Editor in chief of art-agenda. She is a lecturer in the Experimental Film MA program of Kingston University, and in the MRes Art: Moving Image of Central Saint Martins, both in London. Ramos is co-curator of Vdrome, a programme of screenings of films by visual artists and filmmakers. In the past she was Associate Editor of Manifesta Journal, curator of the Research Section of dOCUMENTA (13), and coordinator of “The Most Beautiful Kunsthalle in the World” research project at the Antonio Ratti Foundation.

Paula Nascimento (Director Beyond Entropy Africa) was born in Luanda in 1981. She studied at Southbank University and at Architectural Association School of Architecture in London. She worked for Alvaro Siza Architects and RDA. Paula Nascimento currently lives and works in Luanda, Angola, and is a consultant for COBA Consultores de Energia e Ambiente. Besides she is the Director of Beyond Entropy Africa. Since 2013 she is a member of the Angolan Republic Inter-ministerial Committee for Expo Milano 2015. In the same year, she curated Luanda, Encyclopedic City with Stefano Rabolli Pansera.

Stefano Rabolli Pansera (Director  Beyond Entropy Ltd) was born in Brescia in 1980. After graduating with Honours at the Architectural Association School of Architecture in London, he worked with Herzog and de Meuron between 2005 and 2007. He taught as Unit Master at the Architectural Association from 2007 to 2011 and he held lectures and workshops at the Universities of Cagliari, Cambridge, Naples, Wuhan, Seoul and Madrid. In 2010 he created, edited and directed the research project Beyond Entropy, presented the same year as a Collateral Event at the Venice Biennale in 2011 and exhibited at the Milan Triennale and at the Architectural Association in London. He is the founder of Beyond Enropy Ltd. which operates in Europe, Mediterranean and Africa. In 2012 he became Director of the Museum of Contemporary Art of Calasetta and of Mangiabarche Gallery. In 2013 he curated Luanda, Encyclopedic City with Paula Nascimento.