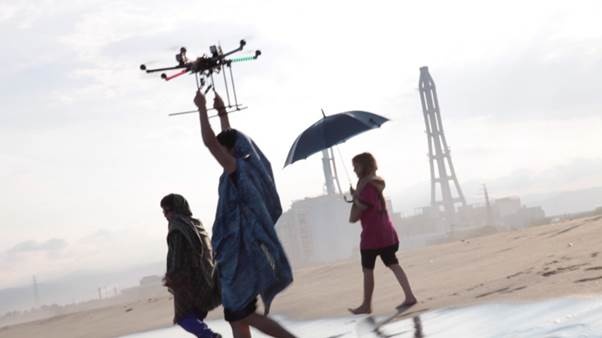 Helena and Miwako (2013) is the sci-fi road movie made by collaborators Ei Arakawa and Henning Bohl, featuring Arakawa’s mother, Miwako; his brother, Tomoo; and Bohl’s 10 year-old daughter, Helen. Over their three week tour of the historical playground structures of Japan, the film reveals the personal histories of a family unit unfolding, placed alongside questions of generational overlaps and parenthood.

The playgrounds of Japanese architect, Mitsuru Senda (born 1941 in Yokohoma, Japan), are ever-present: pragmatic models for behaviour and education, Senda’s playgrounds focus on designs of cyclicality, a focal point of children’s games. The group’s travels focus on the now infamous region of Fukushima, Arakawa’s home town and site of the 2011 earthquake and tsunami.