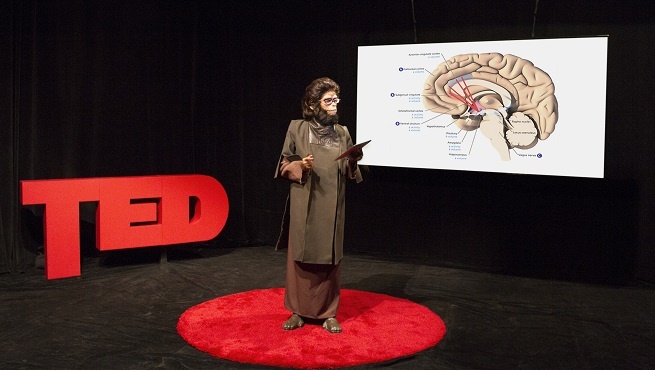 Coco Fusco revives and embodies the chimpanzee animal psychologist Dr. Zira from the original Planet of the Apes films of the late 1960s and early 1970s.

In her Skype introduction, esteemed feminist theorist and technoscience philosopher Donna Haraway explains that Dr. Zira narrowly escaped death in the third film and has been living in hiding, observing human behaviour through visual culture.

In her lecture, Dr. Zira draws from primatology, neuroscience, and evolutionary biology to address human aggression and predatory behaviour for the accumulation of resources in post-industrial societies. Dividing Homo sapiens into categories humans often use to study other species, she finds that economic disparity is a form of violence, primarily enacted by the dominant “alpha” males and females against the majority “beta” population. She also compares this homo sapiens behavioural pattern with that of other members of the homo genus, demonstrating the human shift from empathy towards what she calls “aggressively individualistic behaviour.