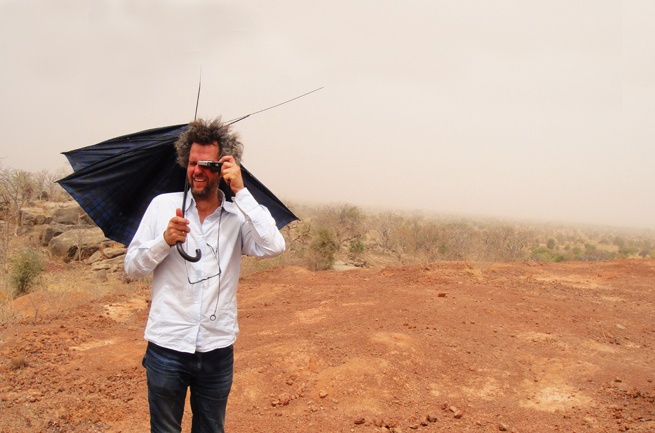 The screening will be introduced by academic Sarah Hegenbart.

Christoph Schlingensief, the German film, theatre and opera director had a vision for an opera village in Africa. Despite cancer, he made trips to Burkina Faso, such was his devotion and conviction. Crackle of Time tells the story of the impossible project to build an opera village in Burkina Faso, a space combining art and life, with a school, theatre, hospital, living quarters, a football field, and a lunchroom.

From the initial location search in May 2009 to the emergence of a school, the documentary gets up close with the German artist Christoph Schlingensief and his architect Diébédo Francis Kéré. The death of Christoph Schlingensief in August 2010 brought the project to a standstill, but the opera village team soon continued with his plans. The documentary gets behind the vision of the 'opera village', witnessing the hurdles and struggles of Schlingensief and his collaborators. In October 2011 the school celebrated its inauguration.

In 2011 Christoph Schlingensief was posthumously awarded the Golden Lion at the Venice Biennale for his stage installation, fluxus oratorium – church of fear in the German pavilion.

Sarah Hegenbart holds a M.St. in Ancient Philosophy from the University of Oxford, a Magister in Philosophy and History of Art from Humboldt University in Berlin and is now working towards her doctorate at the Courtauld Institute of Art in London.

Her current research explores Christoph Schlingensief’s Opera Village Africa (2008-ongoing) in Burkina Faso as a participatory experiment against the backdrop of Richard Wagner’s notion of the Gesamtkunstwerk. Among the exhibitions she has curated are Christoph Schlingensief’s first solo exhibition in the UK and Juergen Teller’s Pictures and Words at the German Embassy in London 2012. Sarah co-edited, together with Sven Muendner and Benjamin Eastham the book Mythos Berlin - A London Perspective, which accompanied an exhibition of the same title that was part of the Frieze Art Fair VIP Programme in 2012.