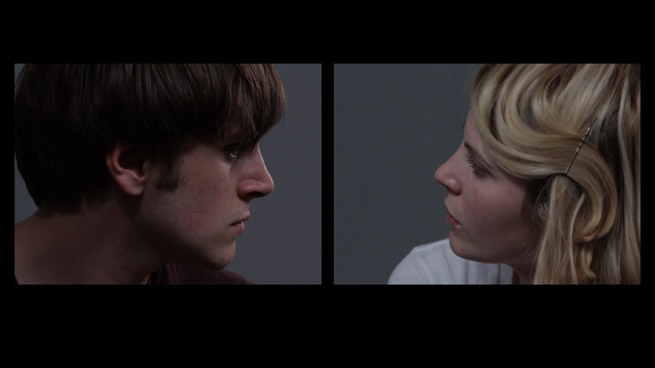 Collaborators Anja Kirschner and David Panos make films and installations that investigate historical events or near futures. Their experimentations with technique and approach build taut and unusual narratives, subverting familiar cinematic norms. This screening brings together two works that investigate the affective and political dimensions of different modes of acting and performance, Living Truthfully Under Imaginary Circumstances, 2011-13, and Uncanny Valley, 2013.

The film combines footage of young actors working with Meisner’s exercises with material from the history of theatre and cinema – including clips of the many film stars that have been trained in his techniques.  It interrogates the meaning of 'emotional truthfulness' in post-modern naturalism and its blurring of the distinction between dramatic artifice and seemingly 'primal', 'human' impulses, simultaneously foregrounding the hypnotic, open-ended, and affective force of Meisner's method.

Uncanny Valley, 2013, connects the investigation into acting and modes of performance started with Living Truthfully Under Imaginary Circumstances with a longstanding interest in digital compositing and animation techniques. The piece weaves together footage of actors performing in a motion capture shoot with imagery created by crowd generating software.

Moving between the intimate process of capturing minute facial expressions to create ‘realistic’ animated characters, and the construction of epic scenes featuring thousands of chaotic figures, the work examines the contemporary representation of these two extremes of experience. Distinctions between long shot and close up, particularity and anonymity, empathy and violence collapse and interpenetrate in the digital continuum, hinting at new configurations in the real.