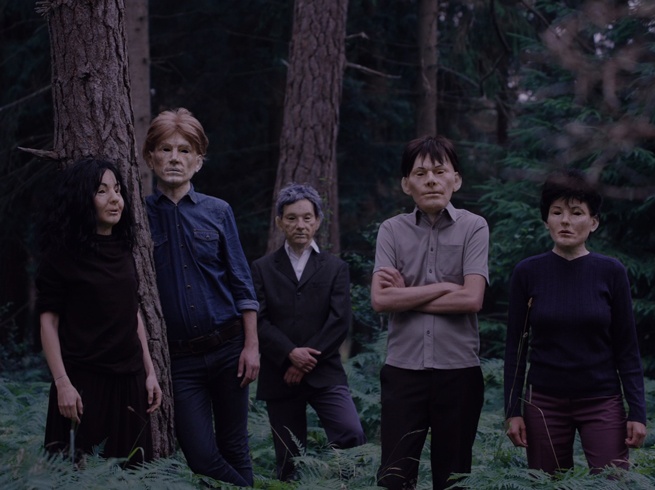 The UK premier of Agnieszka Polska's Future Days (2013). Following the screening Agnieszka Polska and Sebastian Cichocki give a performative lecture, in which they elaborate on the issues presented in the film.

Future Days was shot during the summer of 2013, on the Swedish island of Gotland. In the film artist Agnieszk Polska creates a phantasmagoric image of a heaven inhabited by dead artists, representatives of the avant-garde, bound by a single attribute: they all, in some fashion, vanished from the art scene or discredited their own role as an artist. One of the protagonists is the influential Polish art theorist Jerzy Ludwiński, who suggested that we are living in a 'post-art epoch', and whose non-material activities require a new name and language. The artists seem incapable of being creative; they are condemned to aimless wandering, deprived of the main drive that had once spurred them onward - a fear of death and oblivion. They come in contact with eternity, which is infinitely barren and stifles the need for creativity of any sort. Along the way, the wandering artists find traces of things recalling works of art, including legendary works built into the landscape that disintegrate due of their temporal form. At some points the sky resembles a lumber room for works of art which have attained ‘assumption'.

In her films, collages, and animated works of recent years, Agnieszka Polska has often addressed the issue of institutionalized amnesia and the retrieval of memory (particularly through fiction and confabulation), she has researched mechanisms by which various works of art, artists, or art movements have been legitimized, mythologized, or excluded. She has particularly focused on marginalized or forgotten facts from the twentieth-century history of art in Central/Eastern Europe, focusing on the moments of disappearance (ideas, bodies, materials) and on facts that have become distorted through incomplete photographic documentation or inaccurate filming, or simply from being badly remembered. Future Days picks up these threads, rendering them in the form of a hallucination - a mixture of historical structures and impossible dialogues between artists who never managed to meet in their lifetimes.

Co-production: Baltic Art Center, Visby, Sweden;
Ljubljana Biennial of Graphic Arts as part of the cooperation project with the biennials of Göteborg, Liverpool and Mechelen (within the framework of the European Culture Programme 2007-2013).

The event is supported by the Polish Cultural Foundation

Canary Wharf Screen
A film by Agnieszk Polska is also being shown as part of STOP!, a three-part season of films and moving-image works at Canary Wharf station, in collaboration with Art on the Underground. For more information on this project, visit the ICA Blog →