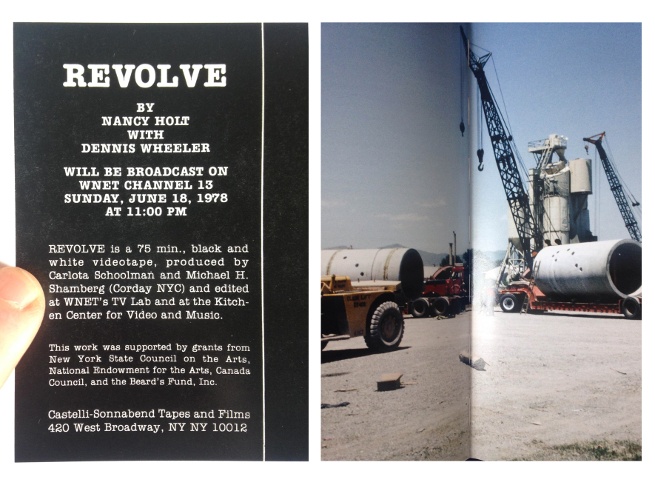 An extended programme of two films by the late US artist Nancy Holt, selected by Glasgow-based artist Charlotte Prodger, who explores similar themes in her practice, sighting Holt as an influential figure.

Using multiple camera angles and minimal repetitions to modulate her friend David Wheeler's personal narrative of his battle with leukaemia, Holt presents his physical illness as a site for metaphysical and aesthetic reflection in Revolve (1977). Holt's editing procedure both frees Wheeler's narrative and closes in on it, effectively projecting the personal into the conceptual. Sun Tunnels (1978) documents the making of Holt's major site-specific sculptural work in the northwest Utah desert. Completed in 1976, the sculpture features a configuration of four concrete tubes or "tunnels" that are eight feet long and nine feet in diameter. The tubes are positioned to align with the sunrise and sunset of the summer and winter solstices, and are also pierced by holes that allow light to be cast in patterns of constellations. A kind of American Stonehenge, Sun Tunnels charts the yearly and daily cycles of the sun, and calls attention to human scale and perception within the vast desert landscape. This document includes stunning footage of the changing sun and light as framed by the tunnels on the solstices.

A pioneer of earthworks and public art, Nancy Holt (b. 1938, d. 2014) also worked in sculpture, installation, film, video, and photography for over three decades. She is best known for her large-scale environmental sculptural works, including Sun Tunnels in northern Utah and Dark Star Park in Arlington, Virginia. In the 1970s, Holt made a series of pioneering film and video works, including several collaborations with Robert Smithson. Holt's early videos, which are among the most iconic works in the medium, explore perception and memory through experiments with point of view and process.