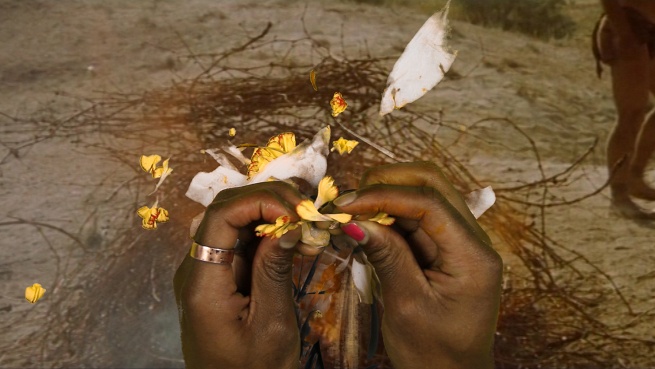 A panel discussion exploring the role of moving image as a device for defining and constructing social identities and the ways these topics are perceived within a wider cultural context. This panel discussion is chaired by filmmaker and writer Ed Webb-Ingall. Participants include artists Jamie Crewe and Rehana Zaman, and curator Kathy Noble.

Jamie Crewe is an artist, a singer, and a beautiful bronze figure with a polished cocotte's head. They studied their BA in Contemporary Fine Art at Sheffield Hallam University from 2006-09 before co-founding PRISM, a bi-monthly art event in Sheffield, and becoming a member of Unit3B and S1 Studios. In 2013 they moved to Glasgow to study the Master of Fine Art course at Glasgow School of Art, from which they graduated with distinction. They have shown work in Germany, Slovakia, Denmark, The Czech Republic, England and Scotland and in February 2016 they opened their first solo exhibition, But what was most awful was a girl who was singing, at Transmission in Glasgow.

Ed Webb-Ingall is a filmmaker and writer with an interest in exploring histories, practices and forms of collectivity and collaboration. His current research examines the ways in which video technology operated within social contexts and how concepts of mobility and access intersect with political platforms of community-based activism and forms of representation. He is currently a mentor at Open School East, London and is carrying out a two-year residency at The Showroom, London. Recent projects include co-editing The Sketchbooks of Derek Jarman, published by Thames and Hudson and We Have Rather Been Invaded, a collaborative film project that looks at the legacy of Section 28, commissioned by Studio Voltaire, London. He is also a TECHNE PhD candidate at Royal Holloway University, England, where his research focuses on the history and practice of community video in the UK between 1968 and 198.

Kathy Noble is a curator and writer based in London, currently working as a curator with the ICA to organise Art Night in July 2016. She was Curator in residence at Wysing Arts Centre in 2013-14 where she worked with artists including Cécile B. Evans, Rachel Maclean and James Richards. Prior to this she was Head of Exhibitions at Nottingham Contemporary where she organised exhibitions with Asco, Geoffrey Farmer, Mark Leckey and Tala Madani. From 2007 - 2012 she was a Curator at Tate Modern, where she organised numerous commissions, exhibitions and events, including co-curating The Tanks opening programme, and the ongoing Tate Modern Live, including major commissions with Tania Bruguera, Michael Clark, Keren Cytter, Haris Epaminonda, Robert Morris and Sung Hwan Kim. She writes widely for magazines such as Artforum and Mousse Magazine, has published numerous catalogue essays, and is a Trustee of Michael Clark Company.

Rehana Zaman is an artist based in London working with moving image and live performance. Her work considers the interplay of multiple social dynamics that constitute subjects along particular socio-political formations. These narrative-based artworks, often deadpan and neurotic, are generated through conversation and collaboration with others. Recent screenings and exhibitions include Contemporary Art Tasmania, The Irish Film Institute, Dublin, The Tetley, Leeds, The Showroom, Studio Voltaire, Tenderpixel and Whitechapel Gallery, London, Berwick Film and Media Festival, Projections Art Rotterdam, Konsthalle C, Stockholm and Baro, São Paolo.