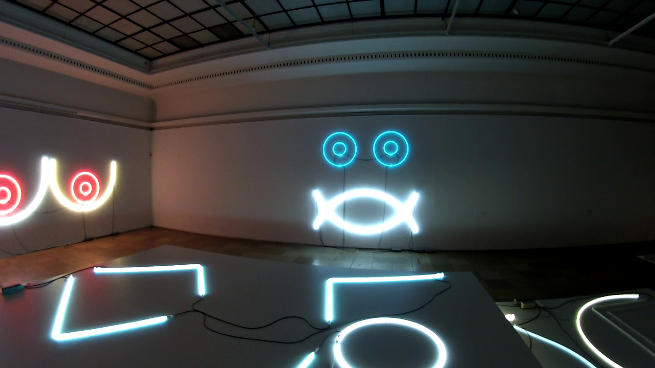 Exhibition on Film compiles footage of exhibitions either taken or re-edited by artists as documentation, or reworked into artworks in their own right. Capturing a moving record of a show, whether for one’s own pleasure or posterity, stands in stark contrast to the flattening of the exhibition in images that often circulates online today. While this has had a noticeable effect on art production as well as exhibition-making, the subjectivism of these films present an artist’s-eye view of how shows can also be seen non-physically.

The selection also charts a technological progression in equipment used by artists, from U-matic video to digital gopro footage. Shown chronologically, Exhibition on Film starts with Anne-Mie Van Kerckhoven’s Komfort Über Alles! from 1980, which follows the artist around her exhibition at De Warande in Turnhout, Belgium overdubbed with an electronic soundtrack by Wily Tieleman. Meanwhile, Elfe Brandenburger, Sabeth Buchmann and Stephan Geene, three founding members of Minimal Club, have retrospectively re-tooled the video Brandenburger took of the exhibition ‘Naturidentische Stoffe’ at Kunstverein München in Munich in 1989, which included early works by Nina Hoffmann, Jutta Koether, as well as Käthe Kruse, Nikolaus Utermoehlen and Wolfgang Müller from the band Der Tödlichen Doris. The final use of handheld video documentation in the programme is Stephan Dillemuth’s walkthrough of the show Internationale Situationniste (1992) at the former artist-run space Friesenwall 120 in Cologne.

More recently, Mark Leckey has recut an existing promotional video produced by Haus der Kunst for his show As If (2015) by editing out the talking heads and adding his own soundtrack. Exhibition on Film ends with Adele Röder’s drone footage of O L Y M P I A, or: Message from the Dark Room, her exhibition at Haus der Kunst last year, which presents an uncanny aerial view of her work by taking advantage of the museum’s architecture.

A self-published zine including short interviews and contributions from each of the participants accompanies the screening, which is also complemented with film posters by Allison Katz and Studio for Propositional Cinema.

Saim Demircan is a curator and writer based in Berlin. Between 2012 and 2015 he was a curator at Kunstverein München in Munich, Germany. Previously he curated a two-year programme of Offsite Projects, as well as an exhibition of works by German artist Kai Althoff, at Focal Point Gallery in Southend-on-Sea, UK. He is a regular contributor to frieze d/e and Art Monthly, and from April will be the first curator-in-residence at the Academy of Fine Arts in Munich.