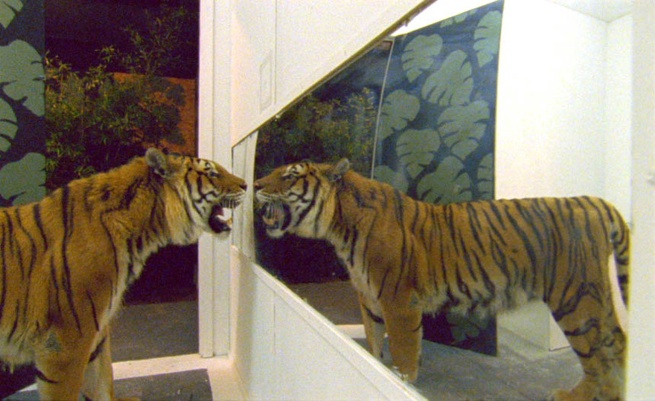 This workshop, chaired by Shama Khanna, and with presentations by Mihnea Mircan, Filipa Ramos, Phillip Warnell and Jessica Sarah Rinland, touches on themes of exhibition and encounter, companionship, animal spirits and unruly creatures in relation to the filmic medium.

Prompts to participants and speakers include:

Mabel Stark was the world's first tiger trainer to train a big cat to tight-rope walk in the 1930s. She could also 'work' 17 Tigers simultaneously in the big top. The geometric form of such human-animal relations and precarious height at which they might take place provides a shape for cinema, sport and spectacle relative to its 'cinemality'. Phillip Warnell addresses some such examples, also referencing his own recent film, Ming of Harlem.

"Melville talks about the bilateral placement of the whale's eyes - he thought whales could entertain two visual fields at once, thus transcend the linear one-thing-at-a-time mode of human consciousness”. Taking this passage from John Durham Peters’ Marvelous Clouds, Jessica Rinland explores the expired and living eye of a whale, its various functions including the ability to determine age, and the intimacy and mutual interruption created between the animal, camera and viewer.

"I'd like to start from The Abandoned Shabono by Juan Downey, particularly the anamorphic space established when a Yanomami reciprocates the gesture of Downey filming him, using an iguana. A kind of animism of the camera and de-animism of the iguana, or perhaps more interestingly a point of intersection between different worlds and jurisdictions." Mihnea Mircan

Shama Khanna is a curator, educator and writer based in London where she curates Flatness, a multi-format event and website project.

Mihnea Mircan was the artistic director of Extra City Kunsthal, Antwerp between 2011-15. His recent work includes the long-term research project Allegory of the Cave Painting. He has also curated exhibitions at the National Museum of Contemporary Art, Bucharest; Museion, Bolzano; Stroom, Den Haag; Spinnerei, Leipzig; David Roberts Art Foundation, London; Fondation Ricard, Paris; Project Art Center, Dublin; and the Venice Biennale, as curator of the Romanian Pavilion in 2007. He edited the books Hans van Houwelingen: Undone (2012) and Cross-examinations (2015), and has contributed essays to monographs on Pavel Büchler, Nina Beier, Victor Man, Jean-Luc Moulène and Laure Prouvost. His writing has appeared in exhibition catalogues and journals such as Mousse, Manifesta Journal and Afterall.

Filipa Ramos is Editor in Chief of art-agenda and Lecturer in the Experimental Film MA program of Kingston University, and in the MRes Art: Moving Image of Central Saint Martins, both in London. Ramos is co-curator of Vdrome, a programme of screenings of films by visual artists and filmmakers. In the past she was Associate Editor of Manifesta Journal, curator of the Research Section of dOCUMENTA (13), and coordinator of “The Most Beautiful Kunsthalle in the World” at the Antonio Ratti Foundation. She is the co-author of the book Lost and Found – Crisis of Memory (2009) and is working on a survey of writings on Animals, to be published by the Whitechapel Gallery/MIT Press in Autumn 2016.

Artist-filmmaker Jessica Sarah Rinland has exhibited work in galleries, cinemas, film festivals and universities internationally. Nulepsy screened at Bloomberg New Contemporaries, New York Film Festival, BFI London Film Festival, International Film Festival Rotterdam, among others, and was broadcast by Canal+. In 2013 she won ICA’s Best Experimental Film for Electric Oil and had a solo exhibition Dissecting The Exploding Whale at Limbo Arts. In 2014 she was artist in residence at the MacDowell Colony and Kingston University, and her film Adeline For Leaves won the Arts + Science award at Ann Arbor Film Festival. London Short Film Festival 2016 screened a retrospective of her work and commissioned a new film on pioneering natural history filmmaker Mary Field (1896 - 1968). In collaboration with author Philip Hoare and academic Dr. Edward Sugden, she is currently in production for We Account The Whale Immortal, exhibited at Somerset House from July to October 2016.

Phillip Warnell is an artist-filmmaker and academic. He produces cinematic works exploring a range of philosophical, political and poetic thematics; ideas on human-animal relations and the poetics of bodily and life-world circumstances. His 2014 film Ming of Harlem won the international jury prize at FID Marseille film festival. His writings on cinema, performance and animality have been distributed in a range of publications, including an essay for a compendium on filmmaker Walerian Borowczyk (L'Ile d'Amour - Berghahn, 2015); a guest edited issue of Journal of Performance Research ('Transplantations', Routledge Press, 2010); a chapter interview in Zoo & Screen Media: Images of Exhibition and Encounter (Palgrave 2016) and a book chapter on his ongoing collaborations (films, texts and photo works) with philosopher Jean-Luc Nancy (Nancy and Visual Culture - Edinburgh University Press, 2015). Warnell is an Associate Professor and Director of Studies on the MA in Experimental Film at Kingston University.