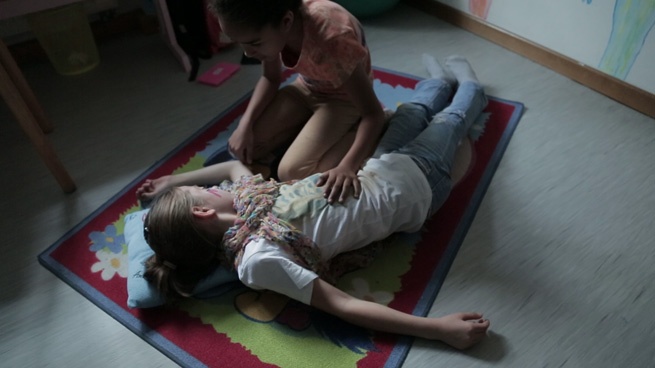 Artist Ken Okiishi has selected a programme for the Artists’ Film Biennial 2014. He shares here his thoughts about the selection process:

I've returned to Leslie Singer's and Cecilia Dougherty's Joe-Joe (1993) many times over the years. The first time I saw it (circa 1998) I actually had to go to the research library to find it - and it was quite the thing to watch in a library! Imagine, playing there on the wide-open viewing station: two co-dependent lesbians channeling Joe Orton, via scratchy biopic drama and loosely applied textual data, cut with scenes of them having very real, at-home sex. My body attempting to hide the screen as creepy NYU students passed by... I was googling Joe-Joe the other day, and there it was, on Vimeo. Strange to watch it now, anytime, anywhere. But, come to think of it, I've never actually seen it screened - and it is such a pity that it barely ever is. There is some painful old gossip that explains why such a brilliant and influential film is so rarely screened, but let's not get into that.

What could it be like to watch this with other people? Wait. This is the Biennial of the Artists' Film. OMGholyshitXXX... uh... As she used to say: CUT! Before there were pixels spraying all over the globe, before a certain (false) hegemony of "connectedness" that just won't seem to go away, before a certain obnoxious coked-up version of supposedly extra-real reality where objects have feelings without us, before Bodies That No Longer Matter...

But, anyway, sorry - so I was watching Loretta Fahrenholz's My Throat, My Air (2013) in its first cut when it was shown in New York City a few months ago. She had said something about working with the script of Mrs. Doubtfire when she was making it - and, well, all that seemed to evaporate in the finished film. And I was reminded of Leslie and Cecilia, where the edges of referentiality (as in, the basic relationships between the thing and its name that give coherence to subjects and objects) start to reshuffle faster than can be tracked. That is the brilliance of how Loretta films children - in slow, extremely real scenes, where you feel that the camera has disappeared and you shouldn't be there. But it is also not 'realist'. That's what should be exciting about watching these films together. Arriving at the continuously dis-aggregate complexity of 'real life', in all of its shattering Phantasie, that is intensely startling to see, now - as we are so used to bodies, like boxes in a diagram, serving as mere connectors between desired arrival points. IRL meets 2Legit2Quit. That should be something to experience in a movie theatre. And you will never look at each other the same way again. - Ken Okiishi