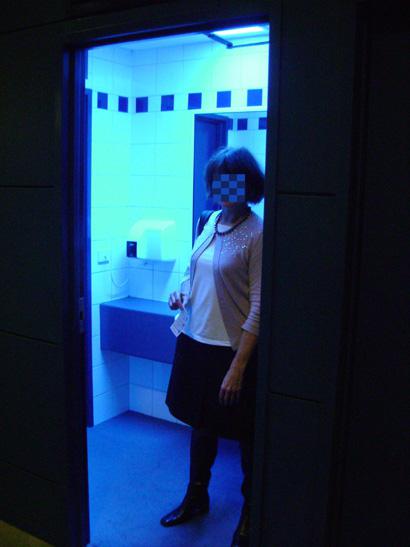 Anti-Junkie-Light, selected by artist Nina Kӧnnemann, explores the use of coloured light in public spaces and experimental film.

I initially defined the films I wanted to include in this programme as films about coloured light. But then again, almost every film projection is a projection of light of some colour, except perhaps in the case of Dietmar Brehm ́s Black Death Filter, 2003.

Thomas Wilfred invented the mechanical Clavilux instrument to compose and perform compositions of light, for which he coined the term ‘lumia’. His philosophy was that lumia could stand on its own as an ‘eighth art’ and should be viewed in silence. Showing a documentation of a recorded lumia composition on a cinema screen, does not equal the detail and subtlety of the original work.

Jordan Belson ́s film Cycles, 1974, was a collaboration with Stephen Beck, for which they amalgamated film and video techniques to produce a unique luminous image quality. Another singular visualisation of light was realised by Adam K. Beckett using an optical printer for his film Heavy Light, 1973. For this programme however, I chose another of Beckett ́s animations, Kitsch in Sync, 1974. I chose this because I imagined how the Blackpool Illuminations could be if they were modelled on this film.

In this programme, the light sensibilities of California are juxtaposed with those found in Austria. In his great expanded cinema work Sugar Daddies, 1968, Hans Scheugl illuminates the walls of public toilets with images of graffiti recorded at the same location. He describes this as ‘creating public’.

Blue light is difficult to represent on video resulting in oversaturated patches of pure colour. In the early 2000s, nightclubs and retail branches started to install dark blue light in their customer toilets to make intravenous drug use difficult. The implementation of this scheme is on the decline. (Nina Könnemann)