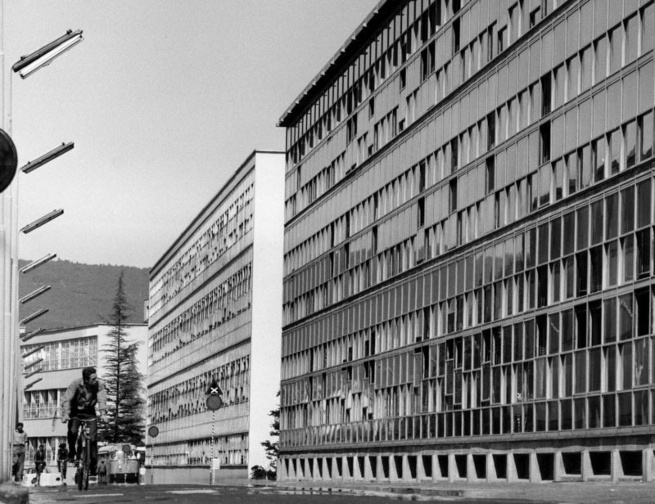 This panel discussion coincides with the ICA Reading Room display Olivetti: Beyond Form and Function and explores the legacy of pioneering Italian typewriter manufacturer Olivetti. The talk focuses on the company founder’s son, Adriano Olivetti, and his progressive ideas around architecture, urban planning and industry in the mid-20th century as explored in his seminal book L'Ordine Politico delle Comunità  (The Political Order of Communities), 1945. Central to the discussion is the Olivetti site itself in Ivrea, Northern Italy and how its architecture sought to create a cohesion between local community and the factory. The talk explores this proposition set out in the 1930s and considers its legacy today through more contemporary models. Speakers include Fabrizio Ballabio, Tommaso Franzolini and Cat Rossi.

Fabrizio Ballabio (b. Italy) is an architect and educator based in London. He graduated in Switzerland at the Academy of Architecture in Mendrisio (AAM) and received his Masters with Distinction at the Architectural Association in London (AA) where he currently teaches as a Studio Master in architectural design and in the History and Theories Studies. Ballabio is a co-founder of ÅYR, an art collective reflecting on contemporary forms of domesticity, and part of the online research platform Factory Futures.

Tommaso Franzolini (AA Dipl – RIBA) is a practicing architect and a researcher. Tommaso is currently project architect at the Advanced Technologies Sector for ScottBrownrigg Group in London, working on the strategic planning and architectural design of the largest Nuclear New Build project in Europe. Previously he worked at Foreign Office Architects in London on large-scale masterplanning and transport assignment including leading a multi-disciplinary team on Birmingham New Street Station redevelopment.

Tommaso is also the founder and director of Factory Futures: a think tank at the Architectural Association School of Architecture run in partnership with the Adriano Olivetti Foundation and Gehry Technologies Europe. Through both practice and research activity, Tommaso keeps exploring the European industrial heritage as a cultural matrix for the development of a new European productive landscape, including the development of innovative architectural strategies through computational design and manufacturing techniques.

Dr Catharine Rossi is a design historian interested in researching, writing, talking and teaching about design practice both past and present with a wide set of audiences. Her publications include Crafting Design in Italy: From Post-War to Postmodernism (Manchester University Press, 2015) and The Italian Avant-Garde: 1968 - 75 (Sternberg Press, 2013), which was co-edited with Alex Coles. She has worked on exhibitions at the V&A and MoMA and in 2014 she curated Space Electronic: Then and Now at the 14th Venice Architecture Biennale. Rossi has contributed to magazines including Crafts, Disegno and Domus.