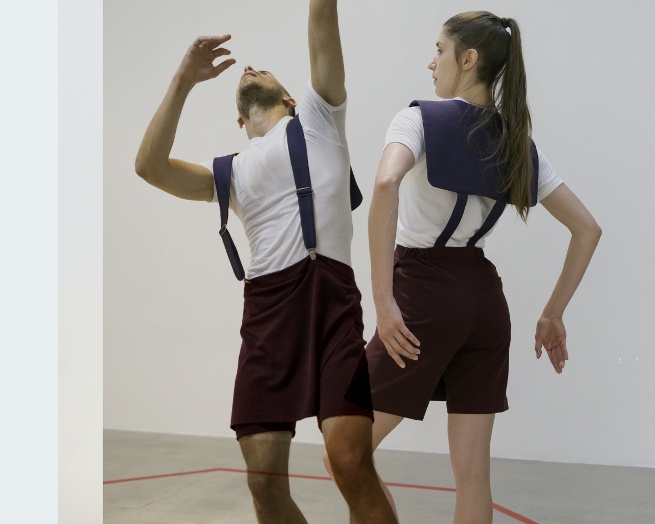 Choreographer and dancer Adam Linder’s Choreographic Services (2013-ongoing) are a series of works, hired on a per-hour basis. His first Choreographic Service, entitled Some Cleaning (2013), sees Linder available for hire on a per-hour basis to clean the gallery, embodying the associated concepts with mimetic movements. His second more complex Choreographic Service, Some Proximity (2014), sees two dancers responding to the written observations of an arts writer, who minutes the artistic or social contexts of the location of the hired service. In responding to the observations with danced action, he seeks to collapse the viewers’ critical distance to the work.

Linder explores ideas of accumulated economic value with his work; considering choreography and dance as performed labour, he highlights the materiality of the performing body. In doing so, he reveals the real-time and economic principles of choreographic activity. The ICA commissioned Linder to conceive and develop a new Choreographic Service; the result is Some Riding (2015), which is now hired for a series of performances in the ICA’s Upper Galleries.

Linder takes the significance of the art historical and institutional contexts of contemporary art production as his starting point for Some Riding. He has commissioned two texts by writers Catherine Damman and Sarah Lehrer Graiwer that examine ideas of “choreographic embodiment” and “economies of performance”. Having memorised these texts, Linder and dancer Frances Chiaverini will recite them while choreographically riding the flow of the language, enacting the written context and providing the performative dynamics for this new piece. He intends to highlight the importance of written contextualisation and its role in communicating the underlying institutional and theoretical structure the work is based upon. Rather than manifesting these texts on the printed page, they are activated by Linder and Chiaverini in the danced activity.

Adam Linder (b. 1983) lives and works in Berlin. Recent Stage Works include Vexed Vista, premiered at Les Subsistances, Lyon (2015); Parade, premiered at HAU 3, Berlin (2013); and Cult to the Built on What, premiered at Kampnagel Hamburg (2013). Recent Choreographic Services include No.2: Some Proximity, Frieze Art Fair, London, subsequently hired by Museum Sztuki Warsaw (2015) and MoCA Los Angeles (2015); and Some Cleaning, Choreographic Service No. 1, featured in the group show Effi B, Silberkuppe, Berlin (2014), subsequently hired by Museum of Arts and Design, New York (2014); Kunsthalle Basel (2014); CCA Wattis, San Francisco (2015); and The Lulennial: A Slight Gestuary, Lulu,  Mexico City (2015). The film Parade, an adaptation of Linder's stage work directed by Shahryar Nashat premiered at The Berlin Biennale (2014); further screened at ICA, London (2014) and The Hammer Museum, Los Angeles (2014).

Please note this is a durational performance and entry is with Day Membership. The performers will begin and break at the times stated below. Audience members are free to come and go during these times.